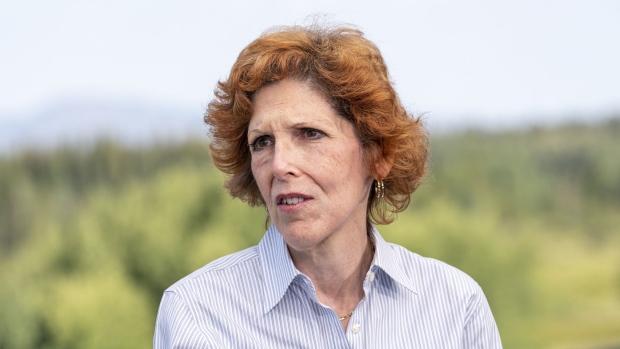 Loretta Mester, president and chief executive officer of the Federal Reserve Bank of Cleveland, speaks during a Bloomberg Television interview at the Jackson Hole economic symposium in Moran, Wyoming, US, on Friday, Aug. 26, 2022. Federal Reserve Chair Jerome Powell signaled the US central bank is likely to keep raising interest rates and leave them elevated for a while to stamp out inflation, and he pushed back against any idea that the Fed would soon reverse course. , Bloomberg

“While this has been a relatively fast pace of tightening, given the current level of inflation and the outlook, I believe that further increases in our policy rate will be needed,” Mester said Monday in prepared remarks for an event organized by the Massachusetts Institute of Technology Golub Center for Finance and Policy.

That means monetary policy “will need to be in a restrictive stance, with real interest rates moving into positive territory and remaining there for some time,” said Mester, who votes in monetary policy decisions this year.

Fed officials lifted interest rates by 75 basis points last week for the third straight time, bringing the target for the benchmark federal funds rate to a range of 3% to 3.25%. US consumer prices rose 8.3% in the 12 months through August and policy makers have said controlling inflation is their top priority, even if that means causing harm to the US economy and its workers.

Median projections released last week show Fed officials see interest rates reaching 4.4% by the end of this year and 4.6% in 2023, a more hawkish shift in their so-called dot plot than anticipated.

The projections imply another 125 basis points of tightening this year, but Fed Chair Jerome Powell, speaking to reporters last week after the meeting, emphasized that a fairly large group of officials preferred to only lift rates by a percentage point by year end.

Mester did not specify in her remarks how much more tightening she thinks will be needed this year, but she said officials will be “resolute” in their efforts to put inflation on a path to 2%. Mester said she would like to see inflation cool for several months before concluding that inflation has peaked.

“High inflation is proving to be more persistent, and more restrictive policy will be needed and for longer to ensure that inflation expectations do not move up and that inflation moves back down,” she said.

Powell and other officials acknowledge that their efforts to control prices could cause pain for businesses and households and lead to a rise in joblessness. The labor market has so far remained strong, with unemployment at 3.7%, but policy makers forecast that’ll rise to around 4.4% next year.

“There will be some pain and bumps along the way as the growth in output and employment slow and the unemployment rate moves up,” Mester said. “But the current persistent high inflation is also very painful for many households and businesses. “