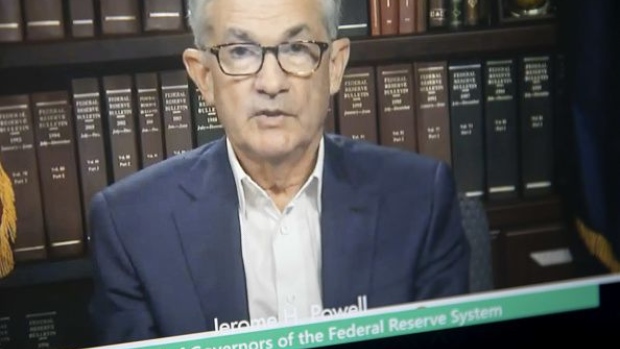 Jerome Powell, chairman of the U.S. Federal Reserve, speaks during the Jackson Hole economic symposium seen on a laptop computer in Tiskilwa, Illinois, U.S., on Thursday, Aug. 27, 2020. This year investors can listen directly during the Federal Reserve Bank of Kansas City's annual event because it will be conducted virtually due to the coronavirus pandemic and streamed live to the public for the first time. , Photographer: Bloomberg/Bloomberg

(Bloomberg Opinion) -- It has only been three weeks since Federal Reserve Chair Jerome Powell unveiled a new approach to monetary policy, letting inflation and employment rates run higher and for longer than the central bank would have done in the past before pulling in the purse strings. And while the stock market has come off its highs since then, this new policy framework should prove positive for riskier financial assets over the longer term because it means the Fed will be much less inclined to prematurely get in the way of economic gains relative to past recoveries.

In practical terms, these changes mean the Fed will tolerate both faster inflation and lower unemployment than in the previous business cycle. Since the Jackson Hole conference, however, policy makers have revealed no appetite for changing policy in reaction to the new strategy framework. That means we shouldn’t expect much if anything in the way of changes right now to the Fed’s forward guidance or the existing asset purchase program.

The Fed’s unwillingness to accelerate the pace of the recovery may at first glance appear disappointing. Still, the lack of additional policy action does not necessarily imply the Fed is not already putting the new framework into operation. To see the Fed’s new framework in action, just turn to the Fed’s forecasts as summarized in the Summary of Economic Projections, or SEP. In the most recent SEP from June, the median Fed forecasts for year-end unemployment and core inflation were 9.3% and 1.0%. Federal Open Market Committee participants unanimously believed that policy rates would be held at the current near-zero level though 2021, while only two believed rates would rise in 2022.

Fast forward to today and it looks like the recovery is proceeding more quickly than the Fed anticipated. The unemployment rate fell to 8.4% in August, and the most recent reading on the Fed’s preferred measure of core inflation from July was 1.3% year-over-year. It seems likely then that the Fed’s new forecast should be substantially more optimistic than in June. It is not unreasonable to think the Fed’s expectation for 5.5% unemployment at the end of 2022 will drop to or even fall below 5%.

Under the new framework, even optimistic shifts in the forecast should not yet bring forward expectations of rate hikes. The Fed does not automatically view a lower unemployment rate as an indication that inflationary pressures are building. Instead, the Fed views actual inflation as more important than inflation forecasts dependent upon the unemployment rate. Moreover, they should be targeting inflation above 2% in the medium term.

In other words, the Fed’s interest rate outlook should remain the same - if not become more dovish - despite the improvement in the economic outlook. Powell and his colleagues should continue to double-down on easy policy even though the Fed’s mandates may be coming into view more quickly than anticipated. This is how the Fed’s new strategy is implemented. Beyond a more dovish assessment of rate policy, further changes such an enhanced forward guidance or shifting asset purchases further out to the long end of the bond market’s yield curve are not likely unless progress toward the Fed’s goals stalls.

I am prepared for a more optimistic assessment of the economy with the usual caveats about downside risks and fiscal policy coupled with an increased commitment to holding rates near zero. That would be a net dovish outcome driven by the Fed’s updated strategy framework. I would not view an improvement in the economic forecasts alone as hawkish. Such improvement should only be viewed as hawkish if the median FOMC participant unexpectedly brought forward rate hike expectations. That’s almost certainly not going to happen. The Fed is not going to step in front of this expansion anytime soon.