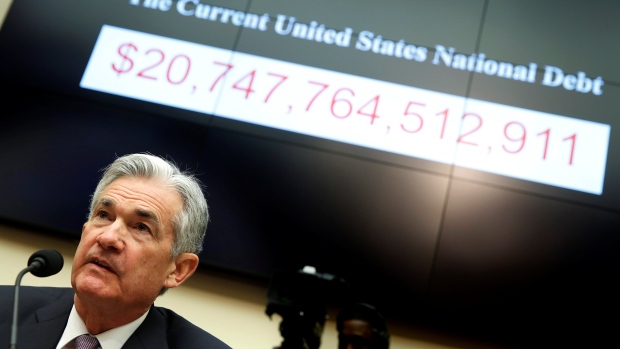 WASHINGTON - Federal Reserve Chairman Jerome Powell, in his first public appearance as head of the U.S. central bank, vowed on Tuesday to prevent the economy from overheating while sticking with a plan to gradually raise interest rates.

Testifying before the U.S. House of Representatives' Financial Services Committee, Powell acknowledged the economy had strengthened recently, a remark that prompted investors to increase bets on four rate increases in 2018.

The Fed's last round of economic projections in December pointed to three rate increases this year.

Powell's overall tone, however, was one of continuity, as he told lawmakers the Fed would balance the need to guard against excessive inflation with the benefits of allowing the economy to enjoy the "tailwinds" of tax cuts and strong global growth.

He said the Fed was in a "process of discovering" how low unemployment could fall before inflation took hold. The U.S. unemployment rate is at a 17-year low of 4.1 per cent.

"The [Federal Open Market Committee] will continue to strike a balance between avoiding an overheating economy and bringing ... price inflation to 2 percent on a sustained basis," Powell said.

"Some of the headwinds the U.S. economy faced in previous years have turned into tailwinds," he added, noting recent fiscal policy shifts and a global economic recovery. Still, "inflation remains below our 2 per cent longer-run objective. In the (FOMC's) view, further gradual rate increases in the federal funds rate will best promote attainment of both of our objectives."

The testimony was Powell's first signal as Fed chief that the Trump administration's massive tax overhaul and spending plans will not prompt any dramatic shifts in Fed policy. "Gradual" has been the operative word used by the central bank since it began raising rates under Powell's predecessor, Janet Yellen, in late 2015.

The Fed is expected to push through its first rate increase of 2018 at its next policy meeting in March, when it will also provide fresh economic projections and Powell will hold his first press conference.

"There was not much couching of the growth story. It was pretty positive," said Brian Coultan, chief economist with Fitch Ratings. "The balance of risks is shifting for the Fed."

U.S. short-term interest rate futures dropped and yields of U.S. Treasuries rose on Tuesday. U.S. stock indexes fell and the dollar was stronger against a basket of currencies.

Powell's appearance before the House panel was largely devoid of fireworks or friction, a contrast to some recent hearings in which Fed chiefs have been grilled aggressively over the central bank's bond buying to fight the 2007-2009 financial crisis and the resulting massive swelling of its balance sheet.

Much of the questioning on Tuesday amounted to a review of where the Fed stands on financial regulation.

Powell, who was nominated by Republican President Donald Trump and later confirmed by the Republican-controlled U.S. Senate, said he felt the Fed's current tools for managing interest rates, a steady decline of its balance sheet, and its 2 percent inflation target were working fine.

That could serve as a subtle rebuff to conservatives who don't like the central bank's practice of managing short-term interest rates through payments on the reserve deposits of banks, but also to some of Powell's Fed colleagues who want to mount a sweeping review of the central bank's inflation target.

The current framework "is working, the market understands it," Powell said. To questions suggesting the Fed needs to more quickly or dramatically reduce its bond holdings, Powell said, "I like our current plan."

Pressed by some Democratic lawmakers about the impact of inequality on the economy, the gap in unemployment rates between whites and blacks, and on the economic implications of stricter immigration, Powell largely recited the Fed's commitment to its goal of maximizing employment with stable prices.

Fed officials, particularly at the regional level, have lately focused their research on parts of the economy left behind during the recovery from the crisis, and some macroeconomic research has suggested rising inequality could impair overall growth.

"Our part of it is to take seriously our obligation to achieve maximum employment ... I would not want to presume policies away from our mandate," Powell said.
Powell used his testimony to strike notes likely welcomed by Republicans, including promises of "transparency" and a nod to the monetary policy rules some of them favor.

But in his remarks and in the Fed's monetary policy report to Congress last week, he stuck close to a safe script, mentioning none of the new initiatives some of his colleagues have pushed for, such as a review of the Fed's inflation management system.

The monetary policy report acknowledged "valuation pressures" in parts of the economy, and noted the recent return of volatility in stock markets.

Though rising long-term interest rates and recent equity market volatility have tightened financial conditions, Powell said, "we do not see these developments as weighing heavily on the outlook for economic activity, the labor market and inflation."

Rather, "the robust job market should continue to support growth in household incomes and consumer spending, solid economic growth among our trading partners should lead to further gains in U.S. exports, and upbeat business sentiment and strong sales growth will likely continue to boost business investment," he said.