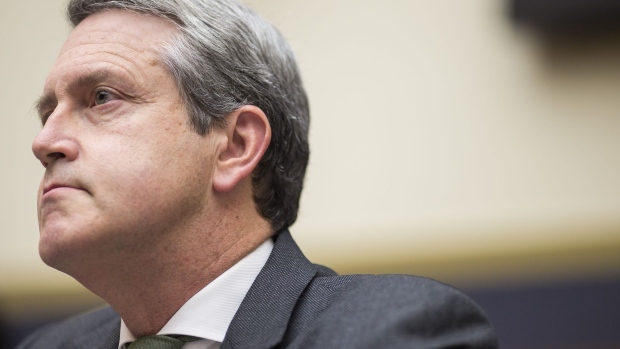 (Bloomberg) -- Federal Reserve Governor Randal Quarles said he favors an initial move to slow monetary stimulus next month and is concerned by a broadening of inflationary pressures that could require a policy response.

“I would support a decision at our November meeting to start reducing these purchases,” he said in remarks prepared for a speech Wednesday to a Milken Institute conference in Los Angeles, referring to the central bank’s bond-buying program, which is currently running at $120 billion a month.

Fed officials are getting ready to begin winding down the bond-buying program they put in place last year in the early days of the pandemic. They broadly agreed to start the process in either mid-November or mid-December, according to minutes of their last meeting on Sept. 21-22.

Quarles said he agreed that current high inflation is “transitory,” and that the central bank is not “behind the curve” with its monetary policy. While price moves have been prompted by supply disruptions during the Covid-19 pandemic, the surges have lasted longer than expected and there has been a broadening of the number of items that have seen price surges, he said.

“There is evidence in the past couple of months that a broader range of prices are beginning to increase at moderate rates, and I am closely watching those developments,” he said.

Quarles added that demand “could be further boosted by the additional fiscal programs currently under discussion.”

“If those dynamics should lead this “transitory” inflation to continue too long, it could affect the planning of households and businesses and unanchor their inflation expectations,” he said. “This could spark a wage-price spiral that would not settle down even when the logistical bottlenecks and supply chain kinks have eased.”

Quarles’ prepared remarks didn’t give an explicit forecast for the timing of interest-rate liftoff. Projections published at the conclusion of the Fed’s September meeting showed officials were evenly split on whether increases in its benchmark interest rate, which is currently near zero, would be necessary next year.

Quarles’ position as Fed vice chairman of supervision expired earlier this month and the Fed Board in Washington decided not to have any single governor take that position while awaiting a fresh nomination by President Joe Biden. Quarles term as a governor extends until 2032. Fed governors in recent history have stood down if they are not reappointed to their leadership roles.