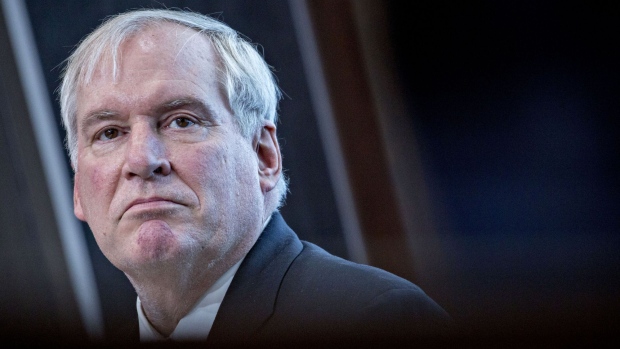 Eric Rosengren, president and chief executive officer of the Federal Reserve Bank of Boston, listens during a Hutchins Center on Fiscal and Monetary Policy event at the Brookings Institution in Washington, D.C., U.S., on Monday, Jan. 8, 2018. The event was entitled Should the Fed Stick with the 2 Percent Inflation Target or Rethink It. , Bloomberg

Federal Reserve officials kept up pressure for Washington to renew fiscal support for the virus-ravaged economy even as hopes of a deal between Democrats and Republicans continued to look dim.

“Fiscal policy is the right tool for this time,” Boston Fed President Eric Rosengren said during remarks Thursday after a speech he delivered at an online event hosted by Marquette University. “I think it’s tragic that it has not been employed already.”

President Donald Trump on Tuesday walked away from talks with Democrats amid differences over the size of another fiscal relief package. House Speaker Nancy Pelosi has since rebuffed his calls to pass relief legislation piecemeal.

“It looks like it won’t happen until after the election,” Rosengren said. “But hopefully, whoever is elected will nonetheless argue and get through Congress a significant stimulus package.” The election is on Nov. 3.

Fed officials, who slashed interest rates nearly to zero in mid-March as the pandemic took hold, have repeatedly warned that the economic recovery is at risk unless Washington provides more aid. Chair Jerome Powell on Tuesday cautioned that the risks of Congress doing too much were outweighed by the risks of doing too little, and his colleagues continued to voice their concerns.

“Individuals and small businesses have been able to resume economic activity through substantial fiscal support,” Kansas City Fed chief Esther George told an online conference organized by Wichita State University. “As the virus persists, and the funding provided to date dissipates, the recovery could stall.”

Dallas Fed President Robert Kaplan, in a virtual discussion hosted by the San Antonio Chamber of Commerce, also piled on.

“The Fed can ease financial conditions,” he said. “We can’t replaced lost income, though. That’s uniquely suited to fiscal policy.”

“Some form of fiscal relief, while we have elevated unemployment -- we expect to for some time -– is going to be important,” he said.