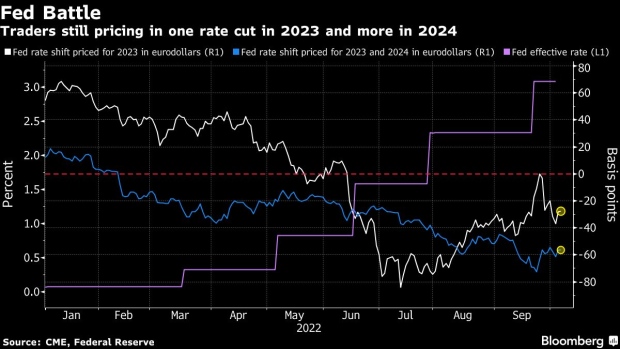 Eurodollar futures showed reduced expectations Wednesday for Fed interest-rate cuts in 2023 but still price in around a one quarter-point move and at least two more in 2024. Federal Reserve Bank of San Francisco President Mary Daly and Fed Atlanta President Raphael Bostic were the latest to bang the drum on the need to keep tightening in place to reduce inflation that remains near a four-decade high.

Traders briefly erased bets on 2023 cuts after the Fed’s strongly hawkish meeting last month, but a series of global economic and geopolitical shocks have reinforced deep concerns that the US and other major economies will tip into recession. As much as Fed Chair Jerome Powell has insisted the lessons of the 1980s show the need to focus on inflation and not growth, investors refuse to believe he will remain steadfast in the face of a severe downturn.

“Fed officials’ consistent push back against rate cuts may reflect a desire to avoid hinting at any loosening in financial conditions,” said Su-Lin Ong, head of Australian economic and fixed-income strategy at Royal Bank of Canada. “If they remain that determined and move into very restrictive territory, as the dot plots would suggest, a US recession is likely and some reversal of policy will likely be needed at some stage.”

Equities and bonds bounced back this week after severe selloffs in September, aided by nascent hopes of a global central bank pivot away from peak hawkishness. While the UK central bank’s decision to resume bond-buying to ease turmoil and the Reserve Bank of Australia’s surprise shift to a slower pace of hikes bolstered sentiment, the Fed’s rhetoric has some on Wall Street warning of a bear-market rally that won’t last.

“We’ve been struggling with this idea that markets are pricing a fast pivot from the Fed next year,” said Christian Mueller-Glissmann, head of asset allocation research at Goldman Sachs Group Inc, who correctly warned that real yields would turn positive this year -- bringing with them bear markets. “We see the Fed continue to hike into next year so it might be too early to expect long-dated real yields to peak on a sustained basis.”

That Fed determination means any move to lower rates could only take place if the US central bank is able to drop its current stance where inflation is the sole focus, said Masafumi Yamamoto, chief currency strategist at Mizuho Securities in Tokyo.

“Whether there would be a rate cut next year or not will depend on the balance between inflation and the economy,” Yamamoto said. “I see a high probability of a rate-cut scenario for latter 2023.”

(Updates with additional context and quotes from fifth paragraph.)