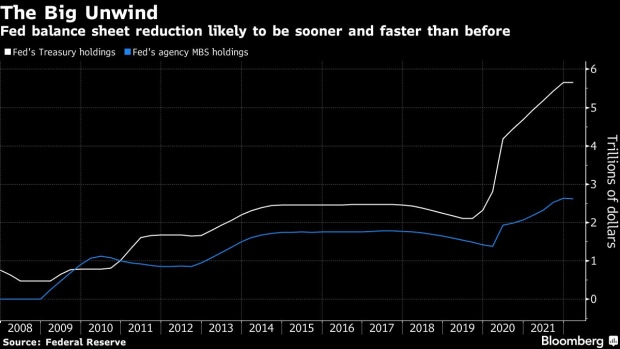 (Bloomberg) -- A rapid one-two punch of interest-rate hikes and balance-sheet reduction from the Federal Reserve risks unsettling bond and stock markets that have already taken a beating.

The effects on markets and the economy of combining the two aspects of monetary tightening in quick succession -- something it hasn’t done before -- are unknown, and investors are telegraphing their concern. The Nasdaq Composite Index slid more than 8% over the past 10 trading sessions, while Treasuries are down about 1.8% this month.

“The scale of what they’re contemplating now is completely unprecedented,” said Janice Eberly, a former Treasury Department official now at Northwestern University. “It’s prudent to gauge the market reaction, especially before moving the balance sheet in concert with interest-rate changes.”

Fed Chairman Jerome Powell and his colleagues would like to see some tightening of financial conditions to take a bit of the edge off the robust economy and help bring down decades-high inflation. A retreat in asset prices after equities and home prices hit records last year would help that process, as long as it didn’t turn into a destabilizing slump that ended up hurting the economy.

Making that task trickier: The Fed has only scaled back its stockpile of bonds once before, in 2017-2019, so there’s not much to go on to try to calculate the impact of a bigger, swifter quantitative tightening this time around.

New York Federal Reserve Bank President John Williams expects long-term rates to “move up somewhat” over time as the central bank downsizes its balance sheet. But he acknowledged last week that it was “pretty uncertain” how big the impact of such quantitative tightening would be. “We have to be humble,” he told the Council on Foreign Relations Friday.

One of his predecessors, William Dudley, expects the process to be smooth. Steady communication of Fed plans will help, as will a liquidity backstop that the central bank put in place last year. The standing repo facility, as it’s called, gives banks an easy method of swapping Treasuries for cash -- a safety valve that can help avert the squeeze seen in 2019.

Yet investors ascribe much more “tightening power” to balance-sheet drawdowns than some Fed analysis does, according the Deutsche Bank AG chief U.S. economist Matthew Luzzetti -- raising the risk of unexpected selloffs in risk assets.

With traders increasingly pricing in a March liftoff for rate hikes followed within months by the start of the Fed running down its bond portfolio, stock investors have become increasingly leery.

Back in 2017, the Fed began normalizing its balance sheet almost two years after it lifted its short-term policy rate from near zero. And it reduced its bond inventory in baby steps, starting the monthly runoff at $10 billion and slowly and steadily increasing it to $50 billion a year later.

Policy makers, including Powell, have made clear they’ll be going faster this time.

The monetary mavens have said that a different approach is justified: The economy is stronger than it was back then, inflation is a lot higher and the balance sheet is much bigger. What’s more, the Fed holds $326 billion of Treasury bills that could come off the balance sheet within months if the proceeds are not reinvested.

By midyear, we expect the FOMC will recognize that they still will need to do more to give the best chance of ultimately achieving their 2% target. As a result, the committee will likely hike five times this year. We currently expect balance-sheet run-off to begin in third quarter of 2022, with a huge band of uncertainty around that timing.

While some retreat in risk assets could be helpful to the Fed, a major plunge could harm the recovery. To avoid that, the policy makers would likely prepare the public for what it intends to do, by -- in the parlance of Powell -- socializing its intentions with investors.

They may have a ways to go to achieve that.

Speaking to reporters on Jan. 13 after a meeting of the Economic Advisory Committee of the American Bankers Association, Morgan Stanley chief U.S. economist Ellen Zentner said the group broadly agreed that the drawdown would begin mid-year. But there was a wide range of views about how quickly that would proceed.

Zentner, for her part, expects a July announcement laying out an initial monthly balance-sheet reduction of $40 billion, moving up quickly to $80 billion in September. That would be in addition to the four quarter-percentage point Fed rate increases she sees this year.

Complicating the outlook: some policy makers have described quantitative tightening as a potential substitute for some rate hikes -- just as quantitative easing was for rate cuts.

Brian Sack, director of global economics for the D. E. Shaw group, estimates it would take about $600 billion in balance-sheet contraction to approximate a quarter-point rate hike. That compares with the $300 billion estimate he came up with Joseph Gagnon in a 2018 paper for the Peterson Institute for International Economics.

The change is because the Fed has deployed much more QE during the pandemic, and longer-term yields are lower and less volatile than in the past. Sack also cited “evidence that rates have been pretty resilient to Treasury supply changes.”

“The economy is strong enough that the Fed will likely have to hike the federal funds rate substantially, even as it shrinks its balance sheet,” Sack, a former Fed official, added.

Some policy makers favor leaning more on quantitative tightening than in the past. One argument for that approach: it could help limit a flattening of the yield curve that crimps banks’ lending margins and thus affect their willingness to provide credit to the economy.

A swift rundown of the Fed’s bond portfolio could press up longer-term yields while policy makers are hiking the short-term benchmark rate. That could preserve margins for lenders, supporting the flow of credit. But a surge in rates across the curve could also damage equities, undermining business confidence.

Powell said this month that plans for shrinking the bond portfolio will be discussed in upcoming policy meetings.

In the end, the economic effects of a balance-sheet drawdown are very uncertain, said former Bank of England policy maker Kristin Forbes. It could be like “paint drying in the background” or could have a bigger impact, especially if markets are unprepared, she said.

“Any movement in that direction should be done extremely cautiously because you will have to feel out the effects as any balance-sheet unwind happens,” said Forbes, who is now at the Massachusetts Institute of Technology.