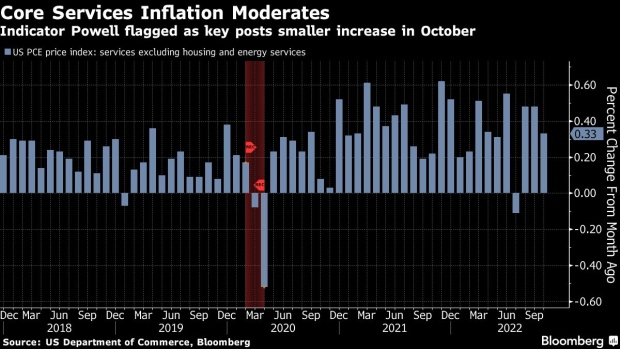 John Williams, president of the Federal Reserve Bank of San Francisco, speaks during a Hutchins Center on Fiscal and Monetary Policy event at the Brookings Institution in Washington, D.C., U.S., on Monday, Jan. 8, 2018. The event was entitled Should the Fed Stick with the 2 Percent Inflation Target or Rethink It. , Bloomberg

“I still think we have a ways to go in terms of where the fed funds target is and where we need to get it to next year in order to get to a sufficiently restrictive stance,” Williams said Thursday during a television interview on Fox Business. “My view is we need to get the federal funds rate above the inflation rate, and sufficiently above the inflation rate to basically bring downward pressure on inflation.”

Fed officials have been raising interest rates quickly this year in a bid to bring inflation down from the highest levels in four decades. They are widely expected to lift the central bank’s benchmark rate by a half-point, to about 4.4%, when they next meet Dec. 13-14. That would mark a smaller increase than the three-quarter point hikes they’ve undertaken at each of their last four policy meetings.

The Fed’s policymaking committee will also publish new projections for interest rates at the conclusion of the December meeting.

Fed Chair Jerome Powell said Wednesday in a speech at the Brookings Institution in Washington that it is “likely that the ultimate level of rates will need to be somewhat higher than thought at the time of the September meeting,” when the projections were last updated. The median of those forecasts was for rates to reach 4.6% next year.

Investors currently expect the benchmark rate to peak around 4.9% sometime in the middle of 2023, according to futures contracts.

The Fed’s preferred measure of prices rose 6% in the 12 months through October, according to Commerce Department data published Thursday, down from 6.3% the month before. Williams said he expects a “significant decline” in the inflation rate next year, though he cautioned that it may not return to the central bank’s 2% target until 2025.

“We’re seeing some forward-looking indicators that inflation is turning,” the New York Fed chief said. “We’re moving now, and into next year, with a lower inflationary trend.”