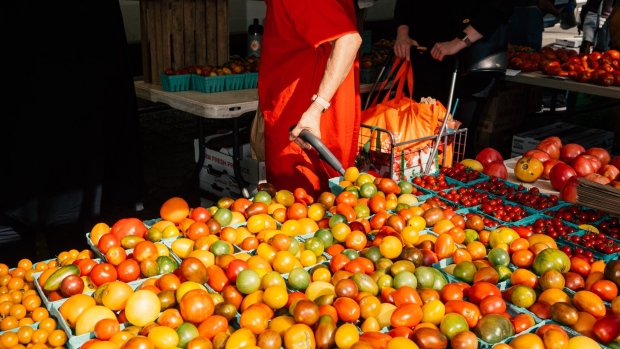 Tomatoes for sale at the Union Square Farmers Market in New York. , Bloomberg

(Bloomberg) -- The U.S. economy is expanding at a “modest to moderate rate” and some districts noted growth slowed citing supply constraints and concerns over the delta variant affecting activity, the Federal Reserve said.

The report was based on anecdotal information collected by the Fed’s 12 regional banks through Oct. 8 and compiled by the Federal Reserve Bank of Richmond.

“Firms reported high turnover, as workers left for other jobs or retired,” the Fed said. “Child-care issues and vaccine mandates were widely cited as contributing to the problem,” the Fed said.

U.S. central bankers are assessing the economic fallout from a spike in Covid-19 infections blamed on the delta variant, while pandemic-induced supply disruptions continue to lift prices.

Inflation is running well above the Fed’s 2% goal. In fact, the price gauge the central bank uses for its official target is up 4.3% from a year earlier, its largest annual gain in three decades. Hiring, meanwhile, fell well short of forecasts in September with nonfarm payrolls growing just 194,000.

Fed officials, wary of inflation, are nonetheless getting ready to start winding down the asset purchase program they launched last year to help shelter the economy as the pandemic spread.

The U.S. central bank is currently buying $120 billion in Treasuries and mortgage-backed securities a month. Officials broadly agreed to start tapering those purchases in either mid-November or mid-December, according to minutes of their last meeting on Sept. 21-22.

Projections published at the conclusion of that gathering also showed the committee was evenly split on whether increases in its benchmark interest rate, which is currently near zero, would be necessary next year.