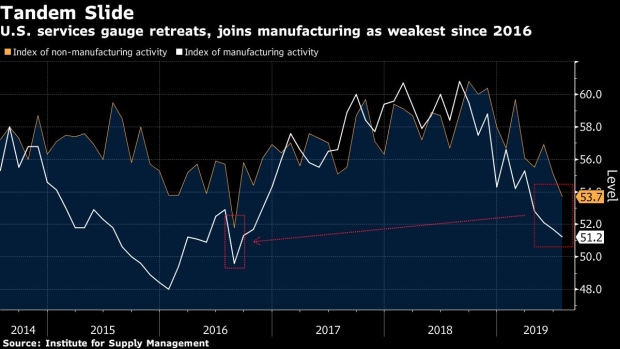 (Bloomberg) -- President Donald Trump has a pithy message to Americans worried about the economy: It’s the Fed, Fed, Fed.

Central bank officials are loath to engage the president directly. But as they gathered this week in the mountains of Wyoming, policy makers explained again and again how trade disputes are poisoning the global economy and making their job more difficult.

“The fulcrum or center of gravity of the U.S. economic policy today is not monetary policy, it is trade uncertainty,” Dallas Fed President Robert Kaplan said Thursday as the Kansas City Fed’s annual symposium in Jackson Hole kicked off.

He was followed by Patrick Harker, president of the Philadelphia Fed, who recounted what businesses in his district are telling him. “What we hear repeatedly from companies is the trade uncertainty. It is not the cost of capital,” he said.

In other words, don’t be fooled by the president into blaming the Fed for what’s slowly curdling the world’s largest economy, illustrated by the weakening of business investment and manufacturing output.

Trump has elevated his criticism of the central bank to a shrill level in recent weeks. In a blunt tweet Friday he wondered who was a bigger “enemy,” Fed Chair Jerome Powell or Chinese President Xi Jinping.

Earlier this month Trump called the Fed “clueless,” all part of his campaign to pressure officials into lowering interest rates more aggressively, to stimulate the U.S. economy. Economic growth this year is still projected to hit about 2%, but that’s not fast enough for Trump, and he’s blamed the Fed.

“Our economy is very strong, despite the horrendous lack of vision by Jay Powell and the Fed,” he tweeted Aug. 19.

That sort of name-calling is surely annoying for Powell and his colleagues. More practically, however, it’s Trump’s extended and unpredictable trade wars that are making it difficult for the Fed to keep the economy on an even keel.

Powell tip-toed into the trade issue more carefully than his colleagues in his prepared remarks to central bankers at Jackson Hole on Friday. He made clear it’s not the Fed’s job to set trade policy. But there was subtle pushback as well.

There are “no recent precedents to guide any policy response to the current situation,” he said. “While monetary policy is a powerful tool that works to support consumer spending, business investment and public confidence, it cannot provide a settled rule book for international trade.”

Indeed, Trump’s Friday tweets were a good illustration. While Powell’s speech, released at 10 a.m. New York time, might have encouraged investors by hinting strongly that an interest-rate cut is coming in September, markets plunged after Trump tweeted about an hour later, vowing retaliation against China in the latest escalation in the trade war. Yields on 10-year U.S. treasuries fell to near 1.5%.

Powell’s remark about “no recent precedents” is an expression of what economists call Knightian uncertainty. It’s a concept named for American economist Frank Knight who distinguished unknowable outcomes from risks that are statistically quantifiable.

For example, Fed officials can come up with estimates about how tariffs will affect import and export volumes and tie that into an outlook for growth, said Michael Gapen, the chief U.S. economist at Barclays Plc in New York. It’s harder, however, to know how tariffs impact business confidence, investment plans and hiring, he said.

“Powell understands more than most Fed presidents that you are going to have to think beyond the model right now,” said Julia Coronado, the head of MacroPolicy Perspectives LLC in New York. “Powell’s answer is, ‘Even if you don’t know the impact of developments with certainty, you have to take action. It is a message of open-ended policy recalibration as needed.’”

For companies, uncertainty has also crept into uncharted territory. Kaplan said the turning point came in May when Trump, despite having struck a fresh trade deal with Canada and Mexico, threatened to impose new tariffs on Mexico unless it stemmed the flow of migrants to the U.S.

That shook companies for two reasons. It meant even after a dispute settlement Trump might still throw any deal out the window. Second, Trump might pick a fight for any non-economic reason and use tariffs as a weapon. More broadly, it hardened the sense that White House trade policy was no longer linked to a predictable strategy.

“Since that point a lot of businesses I speak to have become more cautious on capex and on expansion plans,” Kaplan said in a CNBC interview, referring to capital expenditures. “Businesses now have internalized that trade uncertainty is going to be with us for some extended period of time, even if some of these bilateral trade issues get resolved.”

Manufacturing reports have shown fresh weakness in August data, with the IHS Markit Purchasing Managers’ Index posting its first contraction since 2009. Another gauge from the Kansas City Fed showed factory activity in the district shrank by the most since 2016.

“The world has spent a long time organizing around trade and built up supply chains that are connected,” Gapen said. “If this whole system is starting to unfold, there is an indirect effect through the confidence channel.”

--With assistance from Jeff Kearns.

To contact the editors responsible for this story: Alister Bull at abull7@bloomberg.net, Jeff Kearns