Trump calls for rates to be cut to 'zero, or less'

Powell’s comments “were consistent with his remarks at his congressional hearings last week,” the Fed said in a statement released after the meeting at the White House, adding that the gathering was at the president’s invitation.

The meeting comes amid a steady stream of criticism of the Fed by Trump as the president makes his economic record the center of his bid for re-election next year. His attacks, including an August tweet asking “Who is our bigger enemy, Jay Powell or Chairman Xi?,” referring to China’s president, have shattered a decades-long White House tradition of avoiding public comment on monetary policy out of respect for the Fed’s independence.

Powell “did not discuss his expectations for monetary policy, except to stress that the path of policy will depend entirely on incoming information that bears on the outlook for the economy,” the Fed said.

Trump subsequently tweeted that they’d had a “very good & cordial meeting” and had discussed a range of issues including “interest rates, negative interest, low inflation, easing, Dollar strength & its effect on manufacturing, trade with China, E.U. & others, etc.”

Just finished a very good & cordial meeting at the White House with Jay Powell of the Federal Reserve. Everything was discussed including interest rates, negative interest, low inflation, easing, Dollar strength & its effect on manufacturing, trade with China, E.U. & others, etc.

The U.S. dollar dropped to a session low amid gains in the euro after the news hit that negative interest rates had been among their topics of conversation.

Powell last week called the U.S. economy a “star” performer and voiced solid confidence that its record expansion will stay on track. He and other Fed officials have consistently said that European or Japan-style negative interest rates would not be appropriate in the U.S.

The chairman’s remarks on the economy reinforced a sense that officials judge they have done enough to keep the economy on track after three rate cuts this year, and monetary policy is now on a prolonged hold as long as the outlook remains favorable.

Trump has publicly raged against Powell and the Fed for many months, complaining about its rate increases during 2018 and continuing to pound the central bank this year even as it has cut rates to keep a record U.S. expansion on track, as the president seeks to deflect blame for slowing growth that many have pinned on his trade war with China. 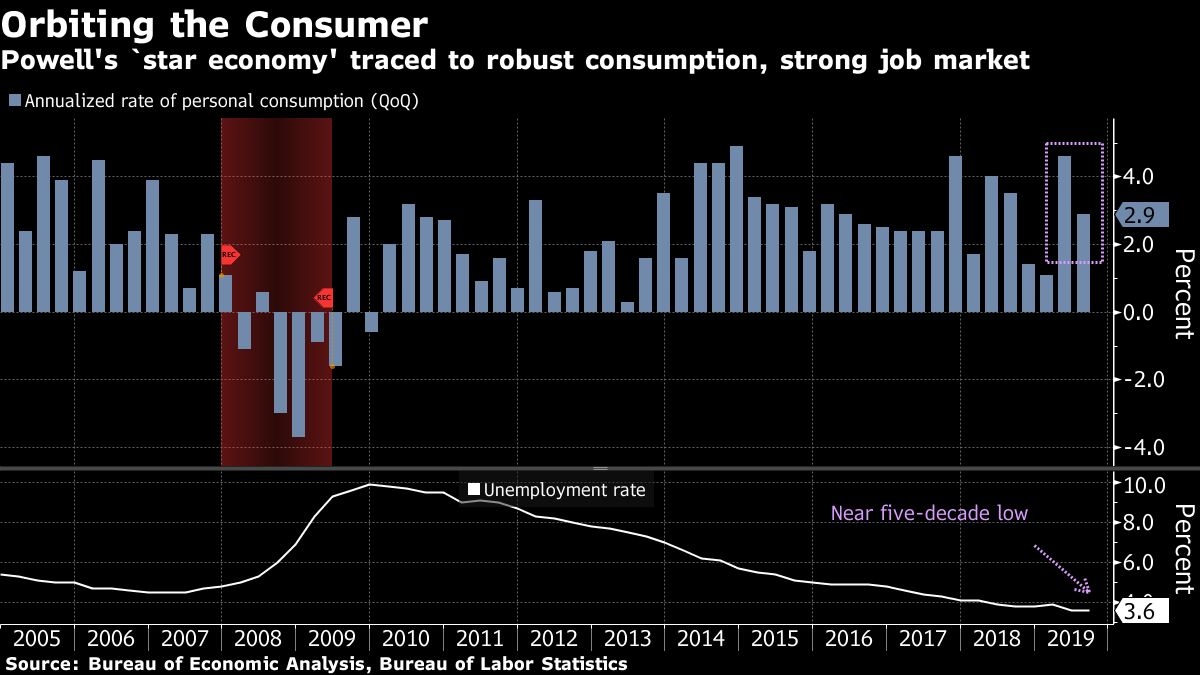 With less than a year until the 2020 vote, the world’s largest economy has been generally holding up this year on resilient consumption. Gross domestic product increased at a 1.9 per cent annualized rate in the third quarter, though that was down from two per cent in the second quarter and 3.1 per cent in the opening three months of the year.

Powell had dinner with Trump in February and the two have spoken since by telephone. Meetings between a president and Fed chief are rare but not unprecedented.

These, though, come amid repeated public criticism by Trump that culminated late last year with Bloomberg reporting Dec. 21 that Trump had discussed firing the man he picked to lead the central bank.

That direct threat to Fed independence — an article of faith among investors in U.S. assets, contributed to already steep stock-market losses that turned the month into the worst December for U.S. equities since the Great Depression.

In addition to public browbeating, the president also has the opportunity to pick people for the Fed’s policy-setting committee. He chose four of the five current members of the Fed’s Board of Governors in Washington and two vacancies remain open.

However, despite announcing his intention to nominate several people for those jobs — most recently in July when he named Trump supporter Judy Shelton and St. Louis Fed research chief Christopher Waller — Trump has yet to actually nominate either.