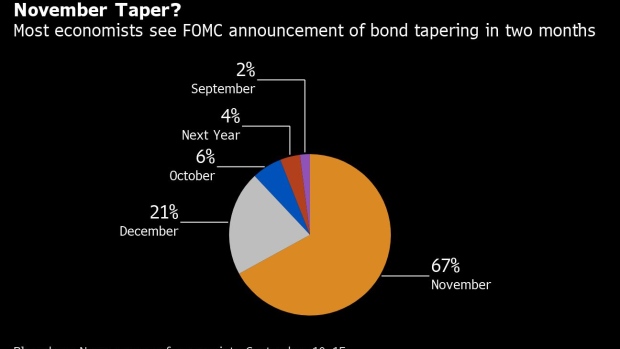 Federal Reserve Chair Jerome Powell will this week face the challenge of convincing investors that plans to scale back asset purchases aren’t a runway to raising interest rates for the first time since 2018.

Officials are expected to hold interest rates near zero while telegraphing tapering of the Fed’s $120 billion in monthly bond purchases in their policy statement at 2 p.m. in Washington Wednesday.

Economists surveyed by Bloomberg see that hint being followed by a formal announcement in November.

The two-day meeting presents Powell with one of his toughest communications challenges as chair and will be conducted under the gaze of President Joe Biden, who’s weighing whether to offer him another four years at the helm.

It also comes as the S&P 500 Index fell the most in about four months amid growing investor jitters about China’s real estate sector and the outlook for the country’s growth.

A decision on the Fed chair nomination is expected this fall. Bloomberg News has reported that Biden’s aides are considering recommending that the president stick with Powell.

In shifting toward a reduction in bond purchases, the Fed chief can take a victory lap of sorts; declaring that the test for tapering -- “substantial further progress” in the labor market and inflation -- has been met.

But how the taper is interpreted alongside fresh quarterly forecasts the Fed will also release on Wednesday, and how that impacts market perceptions of rate liftoff, could be tough.

“There is no economic or liquidity argument that the Fed should be buying $120 billion a month right now,” said Guy Lebas, chief fixed income strategist for Janney Montgomery Scott in Philadelphia. “The urgency to reduce bond buys is about creating more overall policy flexibility to raise rates -- or not -- when we establish whether increased prices are transitory or not.”

Despite threats from new strains of the virus, the U.S. economy is continuing to rebound from the pandemic. Unemployment fell to 5.2% last month and inflation eased somewhat, but remains high.

Read More: What’s a Taper? Why Are Central Banks Debating Them?: QuickTake

Fed officials stand roughly in two camps: Hawks, who have their guard up against inflation and prefer a rapid taper to open the way for a rate hike in the second half of the 2022 if needed. Some in this group also wonder how much slack is left in the labor market as the Fed waits for further job gains.

They’re counting on Covid-19-linked supply-chain distortions getting ironed out over time, easing inflation pressures. They aren’t ready to jump to conclusions about the size of the labor force or people’s intentions to work as the pandemic fades. They see more to learn as the data comes out.

In minutes of the July FOMC meeting, a number of officials made a case for starting the taper early. They argued the pace could be more gradual and thus have less impact on financial conditions, and it would break the tapering-is-tightening link because the process would end before the FOMC’s forward guidance on liftoff had been met.

But when the Fed releases its updated forecasts, they could show less patience on the rate path.

Interest-rate futures are pricing the first hike in March 2023. A fast-paced taper and a growing group of vocal hawks could shape expectations for an earlier increase, especially if more officials join the seven in the Fed’s June dot plot who wanted to raise in 2022.

“Powell’s difficulty is telling a coherent story,” said Derek Tang, an economist at LH Meyer, a policy-analysis firm in Washington.

The FOMC has set three tests to raise rates: inflation must be at 2%; it must be on course to exceed that for some time; and the labor market has to be at maximum employment.

It’s hard to argue that the first two conditions haven’t been met, so the labor-market goal, which the Fed has left numerically undefined, is where officials will stake out their positions.

“The maximum-employment debate will be the prong for the doves,” Tang said. “It is going to be very contentious.”

Cleveland Fed President Loretta Mester and James Bullard of St. Louis are among officials suggesting the U.S. has emerged from the pandemic with a smaller labor force, meaning there is less slack to whittle away before reaching full employment. Both vote on the FOMC in 2022.

Tang said the commitment to the Fed’s new framework is what’s being tested at this meeting. A year ago, the committee said its employment mandate is a “broad-based and inclusive” goal, a nod that it would take account of diverse measures of labor-market slack.

The employment-to-population ratio, a measure of the share of the working-age population that has a job, is still 2.5 percentage points below its pre-pandemic peak.

Many of the people bearing the brunt of unemployment now are low-income workers and minorities. Black unemployment was 8.8% last month

“The inflation mandate is met,” said Julia Coronado, founder of Macropolicy Perspectives. “The question is how long will they overshoot and how persistently, and what weight they put on full employment” in 2022.