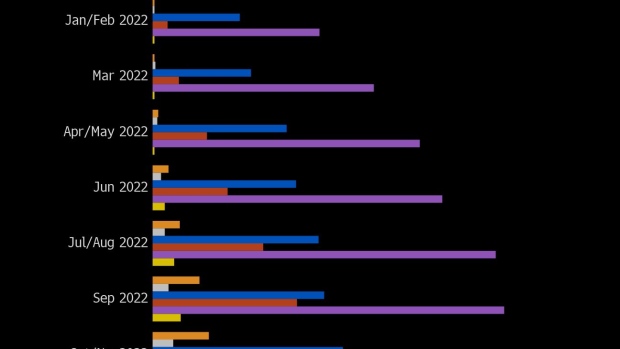 (Bloomberg) -- Compared with the rest of the world’s central banks, the market’s timetable for when the Federal Reserve will start raising interest rates looks positively subdued. Most others, with the exception of the European Central Bank, are expected to move at a far speedier pace.

U.S. traders are now pricing a full rate hike into the Fed’s September policy meeting next year. But by that time, New Zealand’s central bank would have hiked five times, Canada’s three times and England’s four times, according to the interest-rate swaps market.

Yet some think that’s an overly hawkish view. Strategists at TD Securities including Priya Misra have pushed back on this new global policy narrative, recommending long trades in short-term Australian and UK securities “to lean against some repricing in the front-end,” they wrote in a note Tuesday.

The Reserve Bank of Australia has been the first central bank to actively push-back, too, after the swaps markets started to price in that it will start moving toward the middle of next year. The RBA on Tuesday said it will raise the cost of short selling the April 2023 and 2024 bonds to 100 basis points, enforcing a type of yield curve control by making rate-hike bets more costly.

The Bank of England stands out among other central banks in how sharply traders have repriced swaps to bring forward the timing of rate hikes. The hawkish pivot in the front-end of the U.K. curve has been so notable that while banks such as Morgan Stanley are still recommending eurodollar steepener wagers via December 2022 and December 2024 tenors -- indicating a continued path of tightening in U.S. rates -- the equivalent spread in short-term U.K. rates has inverted and is pricing for rate cuts over the same period.

Price action in the early U.S. Tuesday has been relatively calm as traders reassess the new landscape across the world’s key central banks.

“In general, we think that the market has overdone much of the moves in the front end,” the TD Securities analysts wrote.