The Federal Reserve left interest rates near zero and vowed to use all its tools to support the recovery from an economic downturn that Chair Jerome Powell called the most severe “in our lifetime.”

“The path forward for the economy is extraordinarily uncertain, and will depend in large part on our success in keeping the virus in check,” he told reporters in a virtual press conference Wednesday after the Fed left interest rates near zero. He sounded a dour tone about how long a road is ahead to get back to where the country was only months ago and noted that more fallout from the virus still lies ahead.

“Even if the reopening goes well — and many, many people go back to work — it is still going to take a fairly long time for parts of the economy that involve lots of people getting together in close proximity” to recover, he said. “Those people are going to need support.” 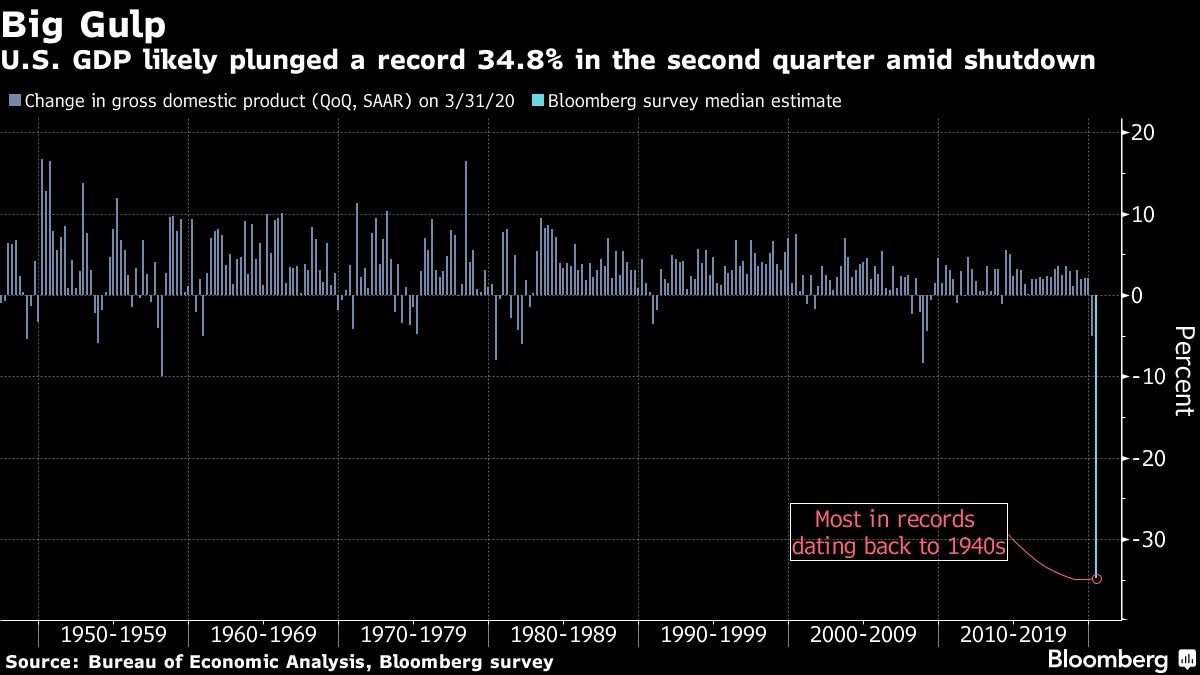 Powell said that not all sectors of the economy were weakening, citing the housing sector as one bright spot. But on balance it looks like the data “are pointing to a slowing in the pace of the recovery,” he said, though it was too soon to say how large — or sustained — this pause would last.

“I think many FOMC members were discouraged by the resurgence in COVID-19 across much of the Sun Belt this summer and the subsequent pullback in economic activity,” said Mark Vitner, senior economist at Wells Fargo & Co. “This summer’s resurgence in COVID-19 showed how vulnerable the economy is and how difficult it is to make economic policy when we do not know what the virus will do next.”

High-frequency economic indicators are pointing to a stall in the rebound as consumers hold back from activities like dining out and air travel, which had started to bounce back when the earlier wave of outbreaks dissipated.

In its statement announcing the policy decision, the Federal Open Market Committee repeated that the coronavirus pandemic “poses considerable risks to the economic outlook over the medium term” and that the federal funds rate would remain near zero “until it is confident that the economy has weathered recent events and is on track to achieve its maximum employment and price stability goals.”

That indication that the Fed could be a near zero rates for a long time to come buoyed markets Wednesday.

The dollar extended its decline Wednesday, while U.S. stocks maintained their gains and gold remained buoyant. The 10-year Treasury yield was steady on the day around 0.57% as the U.S. bond curve steepened.

Five-year yields chalked up a series of record lows in the space of just four hours during the session, a further sign that investors fully expect the Fed to hold rates neat zero for an extended period.

The chair told reporters that supporting the recovery would need help from both monetary and fiscal policy, in a nod to ongoing negotiations among lawmakers and the Trump administration in Washington to refresh taxpayer support before current assistance runs out.

“I see Congress negotiating now over a new package and I think that’s a good thing,” he said.

“Powell’s press conference was very much a moment of truth,” said Gregory Daco, chief U.S. economist at Oxford Economics. “I struggle to recall a time at which Powell, or any recent Fed chair, was as direct and candid about the urgency of fiscal stimulus to support the recovery and prevent a double-dip recession.”

The vote, to leave the federal funds target rate in a range of 0 per cent to 0.25 per cent, was unanimous. The FOMC also reiterated its pledge to increase its holdings of Treasuries and mortgage-backed securities “at least at the current pace” over coming months.

In a separate statement Wednesday, the Fed said it extended its dollar liquidity swap lines and the temporary repurchase agreement facility for foreign and international monetary authorities through March 31, 2021.

Powell and his FOMC colleagues have kept their benchmark rate pinned near zero since the pandemic’s onset in March and rolled out several emergency lending programs geared toward fostering liquid trading conditions in financial markets.

That aggressive action has helped to calm investors. But progress toward recovery has been complicated in recent weeks by a new wave of coronavirus outbreaks across major states in the South and West including Texas, Florida, California and Arizona.

Investors have remained relatively optimistic despite renewed signs of weakness in the economy, thanks in large part to rising hopes that researchers will soon succeed in developing a vaccine.

Before Wednesday’s decision, the S&P 500 index of U.S. stocks was within about four per cent of the record high set in mid-February after losing more than a third of its value in the early days of the pandemic.

Still, Powell made clear that the Fed was not pinning its hopes on a medical breakthrough.