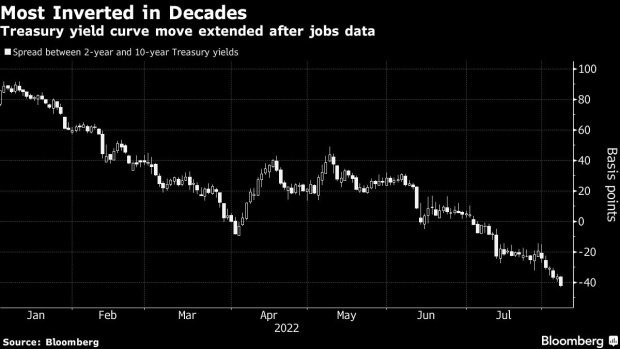 (Bloomberg) -- Front-end US interest rates surged following a stronger-than-anticipated monthly jobs report, with swaps now indicating that an increase of 75 basis points to the Federal Reserve’s benchmark rate is now seen as a more likely outcome than 50 basis points at the central bank’s September meeting.

The rate on swap contracts tied to the date of the September Fed meeting rose as high as 3%, some 67 basis points above the current effective fed funds rate of 2.33%. That implies a hike of at least 50 basis points is seen as definite and an approximately two-in-three chance that it could be three-quarters of a percentage point.

“This sort of data won’t make it likely the Fed will stop any time soon, and as the Fed keeps raising rates it’s going to drag the whole curve up along with it,” said Praveen Korapaty, head of US interest-rate strategy at Goldman Sachs Group Inc.

Contracts for early 2023 also saw rates surge and now imply a terminal Fed rate for this cycle of more than 3.6%.

Front-end Treasury yields surged, deepening the inversion of the curve, with the two-year rate climbing as much as 18 basis points to 3.22%. The premium of the 2-year Treasury rate over the 10-year, a widely watched indicator, reached 43 basis points.

Nonfarm payrolls jumped 528,000 last month following an upwardly revised 398,000 gain in June, Labor Department data showed Friday. The unemployment rate fell to 3.5%, matching a five-decade low. Wage growth accelerated and the labor force participation rate eased. The median estimates in a Bloomberg survey of economists called for a 250,000 payrolls gain and for the jobless rate to hold at 3.6%.

The jobs data put the possibility of a 75-basis-point hike “on the table” for September, although consumer-price inflation data due next week will give direction on whether that’s likely or if the Fed will stick to an increase of 50, said Jefferies economists Thomas Simons and Aneta Markowska.

The greenback also surged along with Treasury rates as US stock futures dived. The Bloomberg dollar index jumped as much as 0.8%, with the US currency climbing versus all its major developed-market peers.