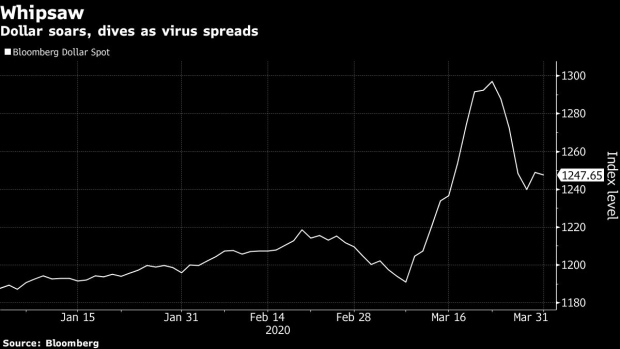 (Bloomberg) -- The Federal Reserve is acting as central banker to the world by seeking to provide the global financial system with the dollar liquidity it needs to avoid seizing up.

In its latest measure to combat the economic fallout from the coronarvirus pandemic, the Fed said Tuesday it was establishing a temporary repurchase agreement facility to allow foreign central banks to swap any Treasury securities they hold for cash. That’s yet another step beyond the actions it took in the 2008 financial crisis.

“To the Federal Reserve’s credit, it is playing the role of central banker to the world rather than denying it and trying to ward it off,” said former Fed official Ted Truman, who is now a senior fellow at the Peterson Institute for International Economics in Washington.

The Fed is trying to prevent a liquidity squeeze amid a worldwide rush into dollars, as the virus wreaks havoc on a global economy that is heavily dependent on the greenback as its linchpin.

“A lot of borrowing and commerce and investing is done in dollars,” Julia Coronado, founding partner of MacroPolicy Perspectives in New York and a former Fed economist, said in an interview on Bloomberg Radio. “When you have a dollar crunch, it can turn a recession or contraction in activity into a financial crisis very quickly because the dollar shortage can trigger defaults and deleveraging.”

Emerging-market borrowers are especially at risk. Encouraged by low U.S. interest rates, they’ve loaded up on a dollar-denominated debt in recent years. They now face a squeeze as their exports plummet due to economic shutdowns worldwide to combat the coronavirus contagion.

Investors rushed for the currency this month, pushing the premium paid to swap funding exposure from euros into the dollar to multiyear highs. While the shortage of dollars has since eased, strains remain in emerging markets.

Unlike the currency swap lines the Fed already has in place with selected central banks -- and which it employed in the financial crisis -- the new repo facility will be open to most foreign central banks and foreign monetary authorities with an account at the New York Fed.

“Almost every country that holds dollars has an account at the Federal Reserve,” Truman said. “My guess is that $5 trillion is held there.”

The New York Fed says it has over 200 account holders, with the vast majority held by foreign central banks and monetary authorities.

The new facility though does lack something the currency swaps provide. While it allows foreign central banks to liquefy their holdings of Treasuries and obtain dollars, it does not add to their reserves. Rather, it just changes their composition.

Krishna Guha, head of central bank strategy at Evercore ISI, said the the repo program should help smaller emerging markets that need to raise dollars to intervene to prevent freefalls in their currencies.

It should also lead to less forced selling of Treasuries by those foreign central banks and thus support the Fed’s efforts to restore some semblance of order to the U.S. government debt market, he said in a note to clients.

The Fed nodded to that reasoning in its statement announcing the new program. The facility “reduces the need for central banks to sell their Treasury securities outright and into illiquid markets,” helping stabilize trading in the world’s most secure and important asset, it said.

There are some doubts though about how widely the program will be used. The Fed is charging 25 basis points over the interest rate on excess reserves -- currently 0.1% -- to buy back U.S. Treasuries. It is hard to know which monetary authorities would opt for the program rather than first trying to sell at market without the extra cost.

The Fed is having to take on the mantle of world central banker because of the dollar’s dominant role in the world economy and the critical importance of the Treasury debt market to the global financial system.

Even though the U.S. was the epicenter of the 2008-09 crisis, the dollar’s role has strengthened since then, in part because the euro’s position has faded due to the ongoing problems of the currency bloc, Harvard University professor Carmen Reinhart told Bloomberg Radio.

Total dollar credit extended to borrowers, excluding banks, climbed to a record $12.1 trillion by last September, Bank for International Settlements data show. That’s more than double the level a decade before. It amounted to almost 14% of global GDP; the ratio back in 2009 was under 10%.

Prior to the latest crisis, some policy makers had warned that the world was becoming dangerously dependent on the U.S. currency.

In a speech to the Kansas City Fed’s annual conference in Jackson Hole, Wyoming, last year, then-Bank of England Governor Mark Carney said the dollar’s position as the world’s reserve currency must end, and that some form of global digital currency -- similar to Facebook Inc.’s proposed Libra -- would be a better option to replace it.

Having the dollar as the world’s reserve currency is often described as an “exorbitant privilege” for the U.S. because it allows the world’s largest economy to raise money on international capital markets at lower interest rates than otherwise.

But it has downsides as well, because it tends to push up the value of the greenback, hurting the competitiveness of U.S. exports -- a key point of concern for President Donald Trump.

“We are responsible for the dollar for better, for worse,” Truman said. “The dollar is the dominant liquidity of the global financial system.”