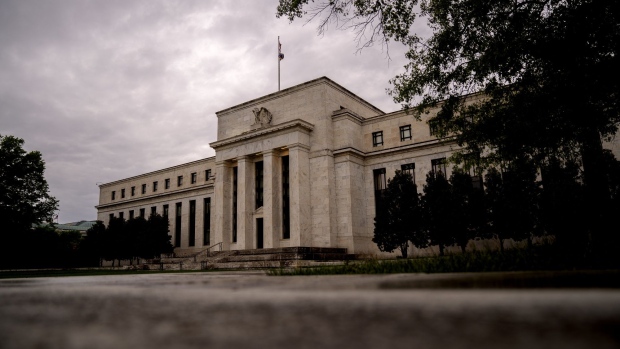 The Marriner S. Eccles Federal Reserve building in Washington, D.C., U.S., on Monday, May 3, 2021. President Biden's $4 trillion vision of remaking the federal government's role in the U.S. economy is now in the hands of Congress, where both parties see a higher chance of at least some compromise than for the administration’s pandemic-relief bill. Photographer: Stefani Reynolds/Bloomberg , Bloomberg

(Bloomberg) -- The Federal Reserve on Wednesday tweaked the rates on some of the tools it uses to help control its benchmark even as it left unchanged the overall target range for the fed funds rate.

The upward shift to the so-called administered rates comes amid the growing dollar glut in short-term funding markets that’s outstripping the supply of investable securities and weighing down front-end rates, despite the steadiness of the Fed’s key benchmark at 0.06%. Fed officials decided to raise the rate on its overnight reverse repurchase-agreement facility by 5 basis points to 0.05%, effective June 17. Policy makers also raised the interest paid on excess reserves by 5 basis points to 0.15%, but left the main monetary policy goal unchanged at 0% to 0.25%.

At present there is $521 billion in cash squirreled away at the overnight RRP facility. Usage could increase as the amount of cash in the system continues to balloon, with Fed asset purchases, fiscal stimulus payments and a debt-ceiling related drawdown of the Treasury main account all contributing to the situation.