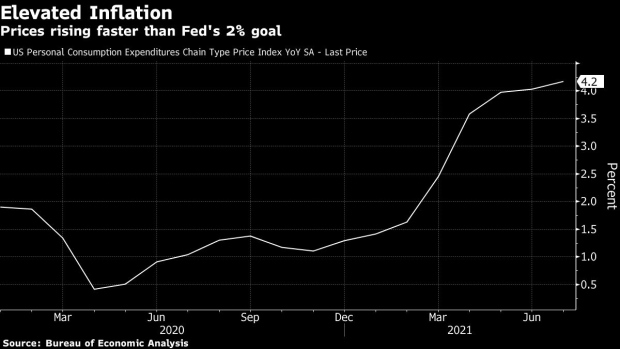 (Bloomberg) -- The U.S. Federal Reserve will be behind the curve in containing inflation coming out of the pandemic, two former monetary policy makers said on Thursday.

“The new framework almost implies that the Fed will be somewhat late when it comes to responding,” Ferguson told a webinar run by the Official Monetary and Financial Institutions Forum think tank. “They’re going to wait until inflation is a clear and present danger.”

Dudley, who is a Senior Adviser to Bloomberg Economics, said the Fed’s stance “increases the risk of a hard landing of the economy” as the central bank will be forced to play catch-up and tighten by “more than normal” in response.

Under the new monetary framework the Fed adopted last year, the central bank seeks to achieve inflation that averages 2% over time and is willing to tolerate price rises above that level for a while to attain that goal.

Policy makers have also set out a three-part litmus test for lifting interest rates from zero: achieving full employment and a 2% inflation rate, along with securing an outlook for inflation to moderately exceed 2% for some time.