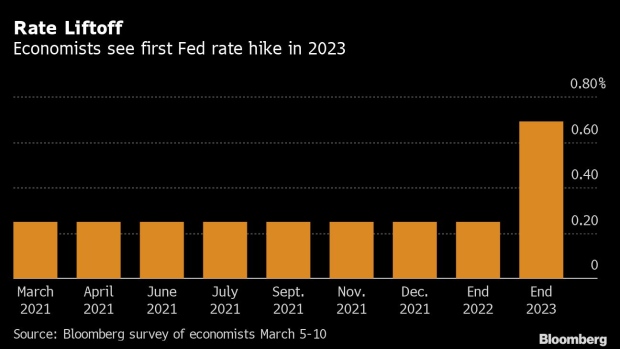 (Bloomberg) -- A strong recovery from the Covid-19 recession is likely to prompt Federal Reserve Chair Jerome Powell and his colleagues to lift interest rates in 2023, but that isn’t going to show up in their forecasts this week, a survey showed.

Economists surveyed by Bloomberg News see two quarter-point hikes in 2023. But they also expect the U.S. central bank’s own forecast, released at the same time as its policy statement at 2 p.m. in Washington on Wednesday, will show the median Fed official projecting rates staying on hold near zero throughout that year.

Such a result would match the Fed’s December projections, even though U.S. lawmakers have backed almost $3 trillion in fiscal stimulus since then, including $1.9 trillion that President Joe Biden signed into law on Thursday, which -- together with accelerating vaccinations -- is boosting the economic outlook.

“The Fed is now probing the unknown as a powerful trio of massive fiscal stimulus, monetary support and pent-up demand impact an economy released by the widespread dissemination of vaccines,” economist Lynn Reaser of Point Loma Nazarene University said in a survey response.

The Federal Open Market Committee is almost certain to keep rates near zero and pledge to continue its asset purchases at the current $120 billion monthly pace at its second meeting of the year.

Powell has repeatedly stressed that the U.S. labor market remains far from the Fed’s goal of full employment, making it too soon to discuss winding down Fed support as the world marks the one-year anniversary of the pandemic.

Even so, three-quarters of the economists forecast the central bank will have to raise rates by the end of 2023, where the median respondent has estimated about 50 basis points of tightening. By contrast, the median in Bloomberg’s December survey had no change in rates until 2024 or later.

“While the economic projections will change, we do not expect rate expectations to move much at all. In fact, while a few dots may drift higher on the dot plot, we expect the center of the Committee to hold the line in terms of not acknowledging any change in the exit timeline.”

The committee, making its first quarterly economic forecasts of the year, will raise its estimates of 2021 growth and edge up the inflation call, while not bringing forward a winding down of asset purchases or interest-rate hikes, in the view of the 41 economists, who were surveyed March 5-10.

The Fed’s closely watched forecasts are likely to show gross domestic product increasing 5.8% in 2021, the survey found, up from 4.2% in the Fed’s December projections. Inflation is seen slightly higher than three months ago, with the unemployment rate falling to 5.0% at year’s end, the same as in the December projections.

The FOMC is likely to continue to forecast near-zero rates through 2023, though it’s a close call, with a third of economists surveyed looking for a median Fed projection of higher rates by then.

In December, one official penciled in a quarter-point increase during 2022, with five seeing hikes in 2023.

“Having a forecast of rising rates seems very unlikely when we are just beginning to discuss how much inflation will move up, for how long, how much the unemployment rate will drop,” said Nathaniel Karp, BBVA chief U.S. economist. “The Fed has to see it, feel it, not just dream about it.”

A sharp rise in U.S. Treasury yields in the past month as economic-growth forecasts picked up has caught the eye of the central bank. Powell and others have attributed the increases to improving prospects and said they don’t appear to be troubling.

The FOMC is unlikely to highlight the risk of tightening financial conditions in its statement or strengthen its forward guidance on interest rates or bond buying, the survey found.

The committee has pledged to continue the current pace of asset purchases until there’s “substantial further progress” on employment and its 2% inflation goal.

“The FOMC will remain in wait-and-see mode for the time being, with no major change in the statement, rate-hike timing, or inflation projections expected at this meeting,” said Scott Anderson, Bank of the West chief economist, in a survey response.

Powell has said the economy isn’t close to achieving the necessary progress to trigger a shift in bond buying and that he will signal any tapering well in advance. That isn’t seen happening until 2022 in the view of a narrow majority of economists.

Most of the surveyed economists also don’t expect any near-term change, such as a shift to buying long-term Treasuries. Even less likely would be altering the mix of Treasury and mortgage-backed securities, or placing a numerical target on Treasury yields, known as yield-curve control, they said.

Powell’s current term as chair is scheduled to end next February. His highly accommodative policies could win him a second stint, according to the economists. About three-quarters expect him to continue in the job, which is about the same finding in the prior survey.

The central bank has occasionally made a technical change to its interest rate on excess reserves, which would not affect monetary policy. Most economists are not looking for a change in March, however.