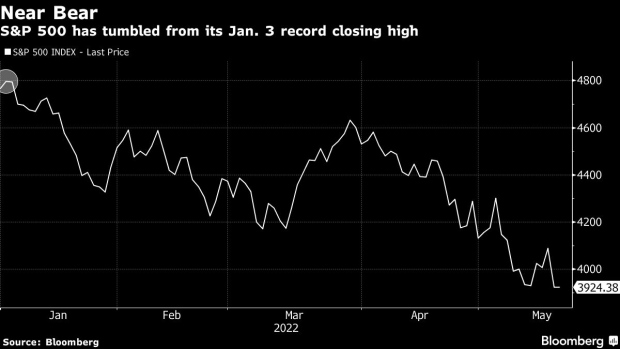 (Bloomberg) -- Don’t count on Federal Reserve Chair Jerome Powell to ride to the rescue of a faltering stock market -- at least not yet.

Kansas City Fed President Esther George said Thursday that the market rout was no surprise in light of the central bank’s repeated caution that it will continue raising interest rates to cool the hottest inflation in decades. While she acknowledged equities were having a “rough” week, her remarks in a CNBC interview did nothing to soften the tone set by Powell on Tuesday, who warned that officials seek “clear and convincing” evidence that price pressures are retreating.

That’s not encouraging for investors betting on the imminent exercise of a “Fed put” -- in which the central bank alters policy to prop up equity markets after a sharp decline.

The Fed raised interest rates by 50 basis points earlier this month and Powell indicated it was on track to make similar-sized moves at its meetings in June and July, as well as start reducing the central bank’s bloated balance sheet. But in the months ahead, signs of a slowing economy and reduced price pressures would set the stage for a debate at the Federal Open Market Committee’s Sept. 20-21 meeting on easing back to quarter-point hikes.

The S&P 500 suffered its worst selloff since June 2020 on Wednesday as investors assessed the impact of higher prices on earnings, following disappointments by retailers  Walmart Inc. and Target Corp., as well as what monetary-policy tightening means for economic growth. This week’s slide extended the year-to-date decline to about 18%. The tech-heavy Nasdaq index is down 27%.

While his remarks were before the latest slide, Powell didn’t sound perturbed by the weakness seen since January.

“Obviously there are some volatile days in the market,” Powell said Tuesday in a Wall Street Journal-moderated event, explaining he was pleased markets have priced in future Fed hikes. “It has been good to see financial markets reacting in advance based on the way we were speaking about the economy and the consequences. Financial conditions overall have tightened significantly. I think you are seeing that. That is what we need.”

“I think the Fed welcomes it. The stock market has to decline a lot more -- double the current drop -- before it will get close to wiping out the stock gains during the pandemic. This sounds callous, but declining stocks will get more people to come out of early retirement.”

Falling equities assist the Fed’s goal of slowing growth because of the “wealth effect” in which investors curtail some spending in response to market drops. JPMorgan Chase & Co. economists have cut their US economic forecasts for this year and next, citing in part the decline in stocks. Each $1 of lost financial wealth translates into a drop of spending of two to three cents over the course of a year, they estimated.

“What we have seen so far remains consistent with the Fed’s objectives in terms of tightening financial conditions to slow growth and realign demand with depressed supply,” said Robert Dent, a Nomura Securities economist. “The market is beginning to come to terms with a Fed that is determined to bring inflation lower at all costs.”

The stock market isn’t the only goal of Fed tightening. Higher rates for home mortgages and vehicles reduces demand in those markets, where supplies have been short, and a stronger dollar has the effect of cutting export demand for US manufacturers and trimming import prices.

Even so, there are limits to how far stocks could fall before the Fed might pay attention. While most of the declines this year have been a revaluation of equities and future earnings based on expected higher interest rates, a decrease that seemed to signal a sharper downturn in the economy than desired would be concerning.

“The Fed may well welcome a tightening in financial conditions, but they are walking a very fine line,” said Roberto Perli, head of global policy research at Piper Sandler. “If S&P 500 earnings estimates as a whole start dropping, the Fed would most likely pay attention. It would be a sign that the economy is faltering and that a soft landing looks even less likely.”

Fed leaders have taken a lesson from recessions of the past two decades that declines in equities are usually not too consequential, while any disruptions in credit markets -- such as the subprime mortgage blowup that lead to the 2007-2009 recession -- can be extremely damaging. The 2000 technology-stock plunge when the dot.com bubble burst has been seen by central bankers as mostly benign for the economy.

“What matter to the Fed is a credit market seizure,” said Diane Swonk, chief economist at Grant Thornton. “That is not easy to recover from and is something to be guarded against. A Fed-induced slowdown is much easier to recover from.”

Most Fed officials have embraced raising rates to a neutral setting --  which neither speeds up nor slows down the economy -- this year. The FOMC estimated that at 2.4% in quarterly forecasts updated in March. Powell and other Fed officials have said they are willing to go well past that level if necessary to cool prices, though the pace of increases could slow.

Chicago Fed President Charles Evans laid out a plan in a Bloomberg News interview this week in which policy makers would raise rates to neutral quickly, then switch to “a more measured pace” of quarter-point hikes to end up 50 or 75 basis points above neutral.

While the near-term policy outlook is unchanged, market turmoil and any indications of slower growth could set the stage for a policy shift from “peak Fed hawkishness,” said Thomas Costerg, senior U.S. economist at Pictet Wealth Management.

“My view is and remains that the Fed will pivot during the summer,” he said, adding the stocks decline portends a slump in growth. “The Fed’s deep DNA of growth and market preservation will resurface.”