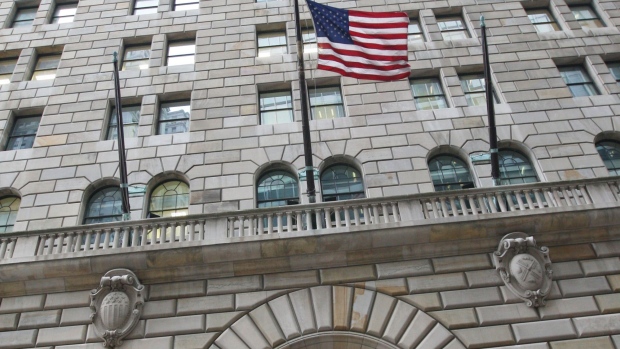 (Bloomberg) -- The Federal Reserve Bank of New York said it will shrink its repurchase agreement operations further starting with Friday’s overnight offering, as it continues to downsize the liquidity injections.

It announced a schedule for 14-day term repo operations for Feb. 18 through March 12. The largest will have a maximum size of $25 billion and those starting March 3 will be reduced to a maximum of $20 billion.

The bank followed a similar pattern in announcing a new term repo schedule in mid-January, when it said it would reduce the operations by $5 billion starting in February. The newly scheduled offerings will provide liquidity through March 26.

The maximum size of the central bank’s daily overnight operations, meanwhile, will drop by $20 billion, to $100 billion. These are slated to continue until March 12, according to the New York Fed’s new schedule.

Fed Chairman Jerome Powell reiterated in congressional testimony this week that the central bank stands ready to adjust the operations as conditions warrant. Powell said last month the Fed would continue term and overnight repo operations at least through April.

The Fed has been conducting repo offerings and Treasury-bill purchases in a bid to keep control of short-term interest rates and bolster bank reserves. The efforts have calmed markets since the September spike that took overnight repo rates as high as 10%, and helped quell concern about a potential cash crunch at the end of 2019.

The Fed also said Thursday that it planned to continue buying $60 billion of Treasury bills each month for reserve management.

To contact the editors responsible for this story: Benjamin Purvis at bpurvis@bloomberg.net, Mark Tannenbaum