Markets are aware that the U.S. Fed 'is running out of runway': FX strategist

The Federal Reserve may have stoked one of the strongest corporate debt market rallies in decades, but it’s too soon to declare an all-clear for credit with the economy facing a potentially rocky road ahead.

Sure, U.S. investment-grade borrowing costs have retreated to near all-time lows, and companies have sold US$1 trillion of bonds at the fastest pace on record — evidence that merely announcing a plan to pump liquidity into corporate debt markets has helped ease strains before barely a dollar of central bank money was deployed.

But the Fed’s emergency pandemic lending programs are just getting started. Chairman Jerome Powell is expected to repeat that the Fed will deploy its full suite of liquidity backstops when he addresses reporters Wednesday after a two-day policy meeting — even if there is little need for some at the moment. 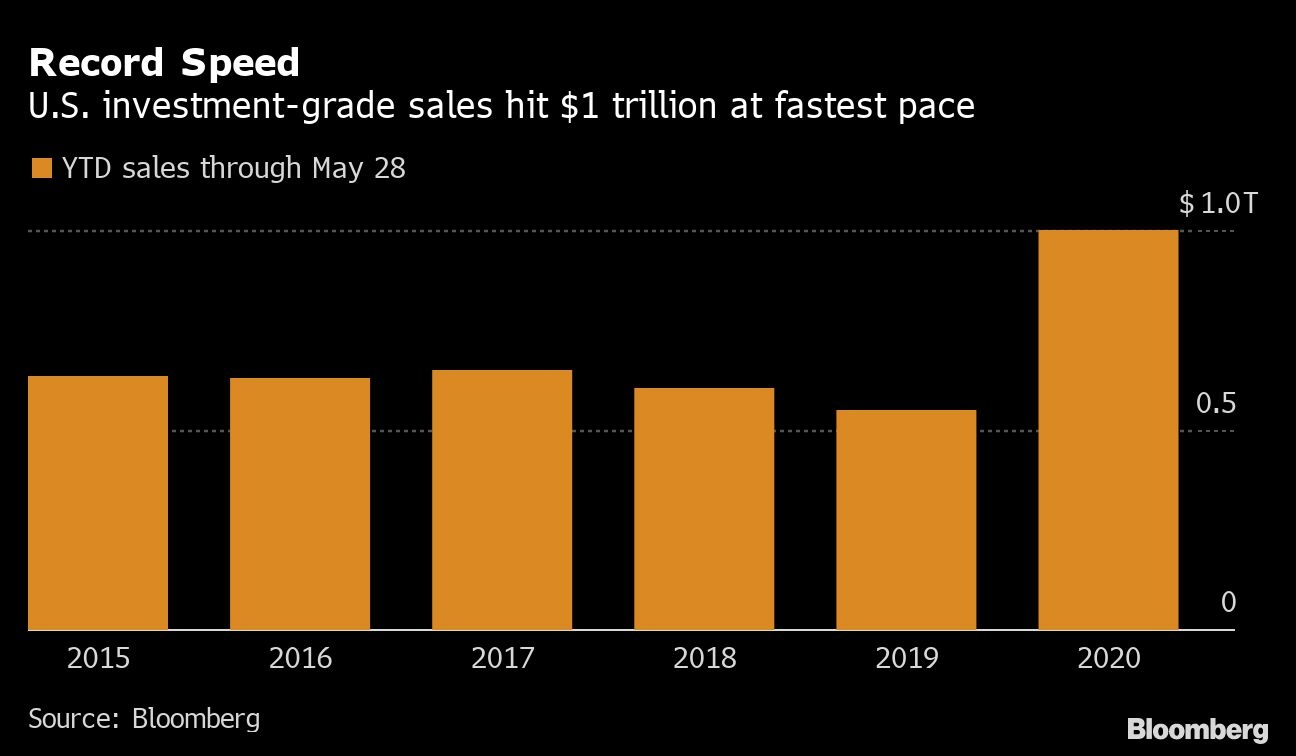 There are also worries that the economy could drag as double-digit unemployment punches holes in consumer demand and corporate revenue growth. Even though the labour market performed better than expected in May, unemployment at 13.3 per cent is well above the peak of the last recession.

Central bankers are likely to remain undeterred in both their credit and monetary policy support until the jobless rate gets closer to their full employment estimate of 4.1 per cent. Fed officials will publish new forecasts this week.

“What the Fed has done is prevented an economic crisis from becoming a financial crisis,” said Julia Coronado, founding partner of MacroPolicy Perspectives LLC and a former Fed economist. “They won’t say it is time to start pulling back. They won’t take it for granted when they see the playbook worked.”

The Fed still has to roll out key components of its corporate credit programs, and officials could stoke the rally further if they announce a decision to ramp up Treasury purchases.

“The programs are doing a lot of work on the credit spreads, but the total cost of finance includes the spread on the risk-free rate,” said Michael Feroli, chief U.S. economist at JPMorgan Chase & Co. He said the Fed will adopt a “belt and suspenders” approach to continued credit easing policies and announce a program of US$80 billion per month in longer-term Treasury purchases sometime over its next two meetings.

The Fed announced two corporate credit facilities March 23 of up to US$750 billion, taking a radical step into direct finance of large companies. Since then, investment-grade and high-yield companies have gone on a record-breaking borrowing spree, taking advantage of robust investor demand that the Fed also encouraged.

The Primary Market Corporate Credit facility will buy bonds directly from companies, as well as slices of syndicated loans. That program is expected to launch in the next couple of weeks, according to people familiar with the matter.

The Secondary Market facility buys exchange-traded funds of investment grade and high-risk, high-yield junk bonds, in addition to bonds already trading in the market. Only the ETF purchases are underway with US$4.3 billion in the Fed’s portfolio as of June 2.

“Before they bought a single bond or ETF, the liquidity crisis was over,” said Hans Mikkelsen, head of high-grade credit strategy at Bank of America Corp. “The Fed doesn’t need to do more. It’s a done deal.”

One reason other components of the programs have been slower to get off the ground is they are complicated. For example, a company must be able to show that it has significant operations and a majority of its employees based in the U.S. for its bonds to be eligible. To obtain a direct loan, the company must also certify that it couldn’t get “adequate credit” in private markets at a normal rate.

Such requirements could mean modest take-up once the programs are fully operational. Fed officials probably won’t worry: they created the programs as a back-stop, not to replace private sector sources of credit.

Looking at Fed guidelines for its manager, BlackRock Inc., it’s tempting to think the central bank’s work is done. The guidelines note three goals: support for corporate debt markets to facilitate “orderly” pricing of risk; support for primary issuance at costs that reflect normal conditions; and to reduce fire sales.

A spokesman for BlackRock declined to comment, as did a spokeswoman for the New York Fed. 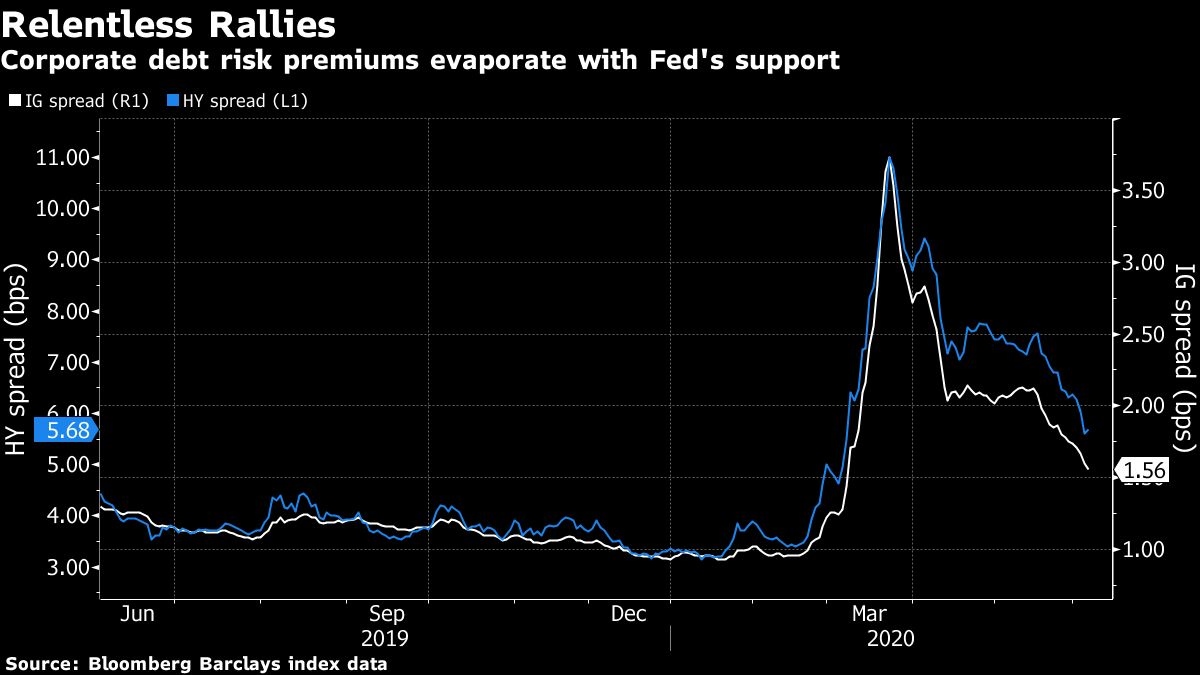 Risk premiums on both high-yield and investment-grade debt have essentially been cut in half since the Fed announced the programs. And chalk one up for the next goal, too, when looking at companies like Amazon.com Inc. setting record low borrowing costs in its recent bond deal. Granted, others like Norwegian Cruise Line Holdings Ltd. are still paying up handsomely to access new funds, a reflection of its fundamental operating stress versus distorted liquidity.

The fire sales may be harder to satisfy. While market liquidity has improved dramatically since mid-March when the pandemic first swept across the U.S., more companies than ever are in distress, and bankruptcy filings are on pace to rival numbers last seen in the Great Recession.

The Fed has made it clear its job is not to bail out bankrupt companies. By sticking to its mission of providing a liquidity backstop for corporate debt, investors question if there’s much work left to be done.

“By coming out so big on corporate credit, investors took over and fixed it for them,” said Elaine Stokes, a portfolio manager at Loomis Sayles & Co. “They’ve done enough, but there’s no harm for them to say we’re here if you need us.”