U.S. is now in a position to be driving overall economic gains: Grant Thorton's Swonk

The Federal Reserve is expected to announce it will begin trimming its US$120 billion in monthly asset purchases before the end of the year as the U.S. economy recovers strongly from COVID-19, according to economists surveyed by Bloomberg.

That’s a bit earlier than forecast in the March survey but leaves Fed asset purchases untouched for several more months, with the first interest-rate increase still not expected until 2023. In contrast, the Bank of Canada said last week it would scale back its purchases of government debt and accelerate the timetable for a possible rate increase, though the European Central Bank meeting on April 22 left its crisis-fighting tools unchanged.

In the survey, about 45 per cent of the economists expect the Federal Open Market Committee to announce tapering in the fourth quarter with 14 per cent seeing that happening in the preceding three months. The survey of 49 economists was conducted April 16-21. The result is a hawkish shift from March when slightly more viewed tapering as a 2022 event. 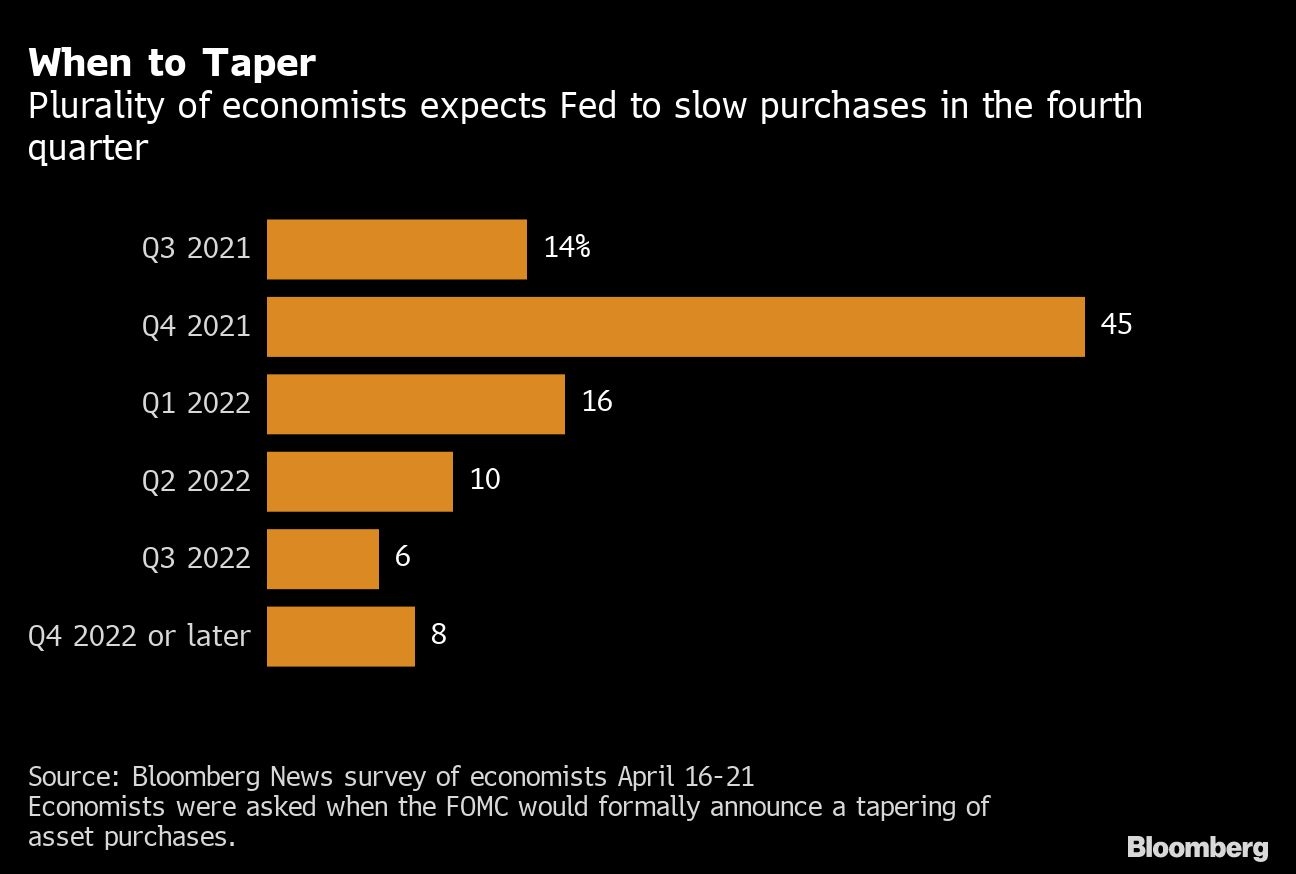 The FOMC concludes its two-day meeting on Wednesday and is expected to reaffirm plans to only adjust purchases once the U.S. economy achieves “substantial further progress” toward its employment and inflation goals. Nor is the Fed expected to raise the target of its benchmark rate from a zero to 0.25 per cent range. The FOMC policy statement will be released at 2 p.m. Washington time with Chair Jerome Powell holding a virtual press conference 30 minutes later.

Economists say they will scrutinize the statement language and press conference for hints of a potential tapering. Powell has said he’ll alert markets well in advance of that change when the committee views its goals in sight, and that a policy change will hinge on actual incoming economic reports, not just bullish forecasts.

“We think this is too early, given the insistence of the Fed to focus on ‘hard’ economic data and not expectations for improvement,” said Gero Jung, chief economist at Mirabaud Asset Management. “In our view, the Fed wants to see a sequence of very positive data -- like the March jobs numbers -- before starting to initiate a tapering process.”

“Our view is that the tapering happens in the first quarter of next year. This will give plenty of opportunity to pre-announce/forewarn/hint/etc. starting from the July semi-annual testimony, through Jackson Hole and over the course of the second half.”

More than two-thirds of the economists surveyed expect the FOMC will give an early-warning signal of tapering this year, with the largest number -- 45 per cent -- looking for a nod during the July-September quarter. That could come from either the July or September FOMC meetings, or Powell’s semi-annual testimony to Congress. Another option is the Kansas City Fed’s annual late-August Jackson Hole Economic Symposium, which has been used as a venue to deliver signals in the past. The Fed chair typically gives the keynote speech and Powell has so far continued that tradition.

Recent economic data have supported the Fed’s view of a robust rebound this year, with unemployment dropping and inflation expected to exceed 2 per cent in 2021. While the FOMC has been intentionally vague on how it will define “substantial further progress,” economists in the survey expect tapering to start when the unemployment rate is around 4.5 per cent with inflation at 2.1 per cent, measured by the personal consumption expenditures price index.

Yields on U.S. Treasuries have risen this year amid an outlook for an earlier taper, though Powell and other Fed officials have urged patience. In the minutes of the March FOMC meeting, the committee indicated it would take “some time” to achieve substantial progress. 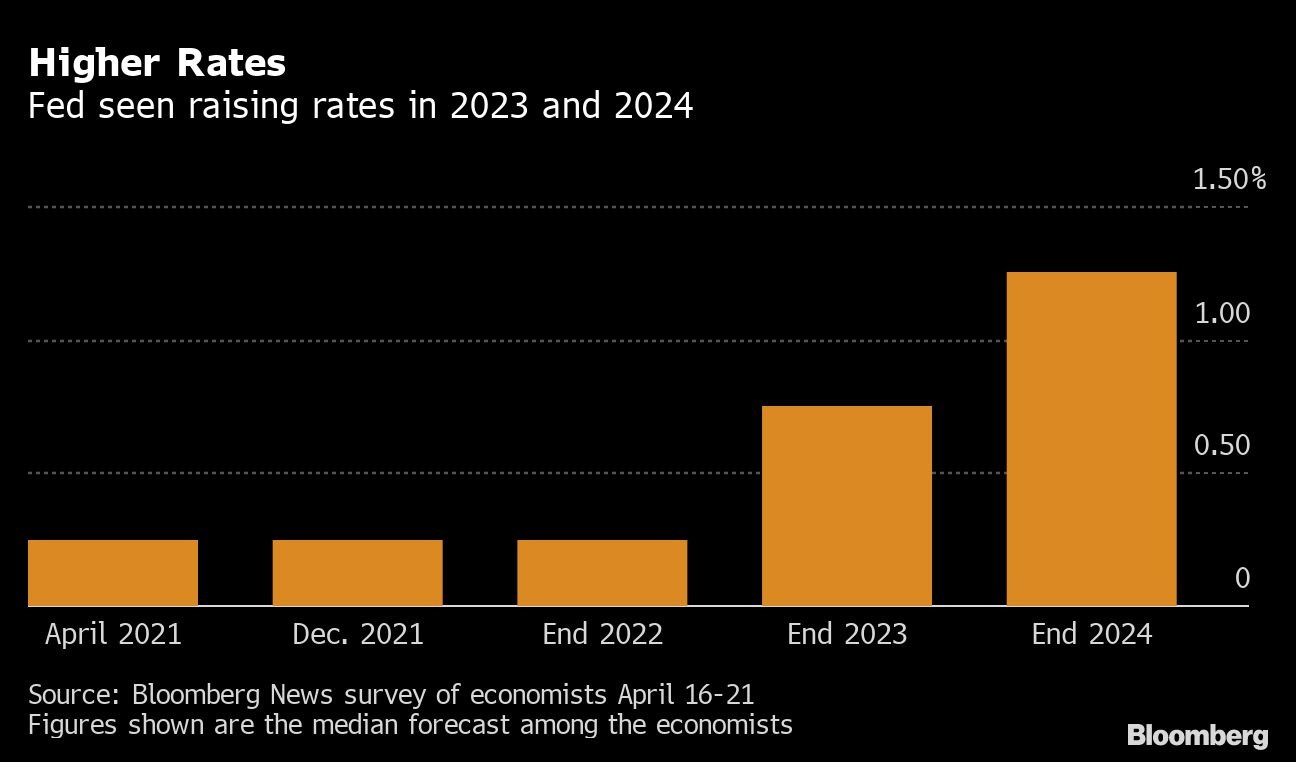 The improved outlook will be underlined by the government’s report of first-quarter gross domestic product Thursday, expected to show a 6.8 per cent increase, according to economists surveyed by Bloomberg.

“The Fed is turning increasingly bullish on the economy, but it still views any thoughts of hinting at a future tightening as premature,” economist Lynn Reaser of Point Loma Nazarene University said in a survey response.

Most economists expect the tapering of US$80 billion in Treasuries and US$40 billion in mortgage-backed securities purchases to last seven to 12 months.

“The Fed’s revised monetary policy framework, unveiled last summer, is significantly different from the past, where the Fed would tighten policy preemptively to head off inflation,” said Scott Brown, chief economist at Raymond James Financial Inc. The new framework means central bankers are instead looking for actual data. 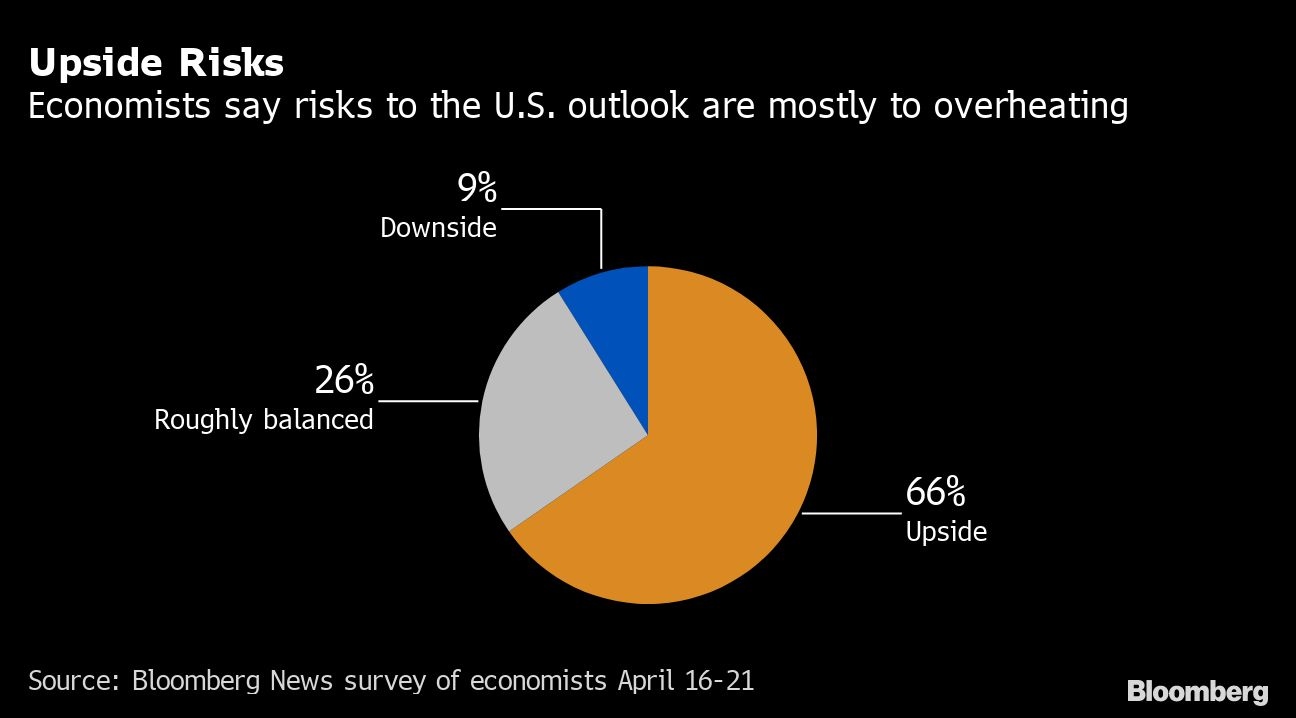 Powell’s current term as Fed chair expires in February. Around three quarters of the economists expect Biden to keep him in the job, an overwhelming number that’s broadly unchanged from the March survey. Powell has deflected all questions on whether he’d serve four more years if asked, leaving the impression intact that he’d like to stay at the helm.

The strong economic momentum is lifting the outlook among economists, with nearly two thirds saying risks are to the upside. Some 26 per cent view them as roughly balanced and 9 per cent emphasize downside concerns. An accelerated U.S. vaccination program, fiscal stimulus and President Joe Biden’s US$2.25 trillion infrastructure and jobs plan all create the risk of overheating, in the view of economists.

“The Fed could raise rates sooner than expected if a major infrastructure bill is passed,” said Joel Naroff, president of Naroff Economics. “That would secure solid growth well past the time the stimulus runs out and make it unnecessary to keep rates so low.”

The FOMC might consider a minor change to a technical rate, the interest on excess reserves, the minutes of the last meeting showed. About one fifth of the economists are looking for a change at the April meeting, which would move the rate up to 0.15 per cent from 0.10 per cent.