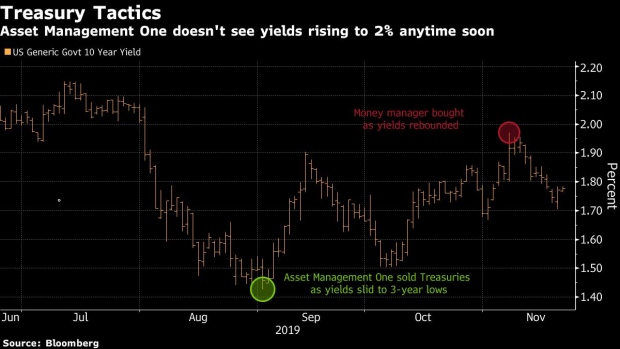 Pedestrians are reflected in an electronic stock board outside a securities firm in Tokyo, Japan, on Friday, March 1, 2019. Japanese shares advanced as the latest batch of U.S. data suggested the world’s largest economy is still on a solid growth track and as the yen continued to weaken against the dollar. Photographer: Toru Hanai/Bloomberg , Bloomberg

(Bloomberg) -- Japan’s Asset Management One Co. has a bullish call on Treasuries. One for the long, long run.

The money manager overseeing the equivalent of $488 billion says benchmark U.S. yields will keep falling as structural changes in the economy and stubbornly low inflation see the Federal Reserve following its peers in Japan and Europe in lowering interest rates toward zero.

“The U.S. will stay in a monetary easing cycle in the long run,” said Yusuke Ito, a fund manager in the global fixed income investment division at Asset Management in Tokyo. “There are structural issues which need to be addressed. The problem of aging demographics is slowly coming and will affect the supply-and-demand balance in the economy.”

As markets look forward to the new year, the key questions for global investors are how much further will the Fed go in easing its monetary policy and whether the U.S. and China will be able to reach a trade deal. While futures traders are pricing in just one quarter-point rate cut by the Fed next year, some strategists -- including at NatWest Markets and TD Securities -- are expecting two reductions.

Signals of a slowdown in the U.S. manufacturing sector will weigh on the labor market and consumption, Ito said. The trade dispute “won’t resolve easily” as both China and America are fighting a battle for supremacy, he said, citing it as another reason for Treasury yields to decline.

Asset Management sold Treasuries when the 10-year yield dropped to a three-year low of 1.43% in September as the market was “overheating,” Ito said. However, it bought the securities when signs of progress in trade talks saw yields rise back toward 2%. They won’t climb back to those levels anytime soon, he said.

The Treasury yield curve is expected to steepen as the Fed’s easing phase extends, Ito said, without providing any yield forecasts. Ten-year yields have slipped 91 basis points this year to 1.77% to head for their biggest annual drop since 2011, as the Fed lowered interest rates three times.

Despite the slide, the yields are among the highest in developed markets without the cost of currency-hedging, and remain one of the top investment options for Japanese investors who continue to grapple with negative yields at home.

Asset Management’s bullish call comes when traders have been indicating that Asian real-money funds -- including from Japan -- have been steady buyers of long-end U.S. debt over the past two weeks.

The money manager has also been overweight Mexican bonds as it sees “large room” for the central bank to ease policy, including a move as early as December, Ito said. That’s even as the monetary authority cut the benchmark rate by a quarter point to 7.50% earlier this month.

“Mexico moved very closely with the Fed in raising rates but it may have tightened too much, restraining inflation and causing its economy to slow down,” Ito said.

Asset Management is “very bullish” on Italy as it considers the nation’s bonds to be undervalued relative to those in Portugal or Greece, Ito said. It also finds Spanish debt appealing for the nation’s current-account surplus and push for economic reforms.

The money manager doesn’t prefer bonds in other European nations “as there isn’t much room for the European Central Bank to ease its monetary policy,” Ito said.

--With assistance from Alyce Andres.