Workers will be required to return to the office if their employer wants them to: Lawyer

Managers hoping to lure employees into offices may find their youngest and newest staff are their strongest allies.

Young white-collar staff feel caught between a rock and a hard place — they value quality of life over old-fashioned 9-5 commuting, but are even more worried about seeing their careers stall unless they head back into an office. That’s encouraging many to be among the first to return to their desks.

While experienced employees often have established professional networks and dedicated home offices, younger staff say the pandemic has left them under-informed and cut off from their teams. There are now growing concerns that they are missing out on career opportunities older colleagues took for granted.

Well over half of staff aged 21-30 stressed the importance of being able to meet and work with colleagues in person again, according to a 6,000-person survey carried out for Sharp Corp., results of which were shared with Bloomberg. Nearly 60 per cent said working in a modern, collegiate office environment has become more important to them over the past year.

Despite a majority under 30 saying remote work made them more productive, over half of the survey’s respondents across Europe — ranging in age from 18 to 45 — say they feel anxious about a lack of training and career opportunities when thinking long-term about the future of work. 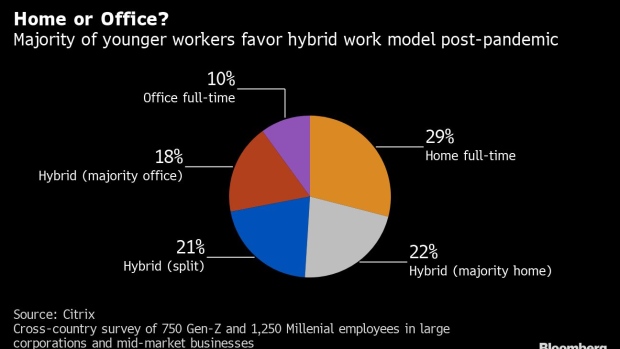 Sophia McCully, a 28-year-old working in public policy research, has worked from home ever since starting her current role. She believes the enforced isolation has had a significant impact on her professional development.

“I think the ability to make those connections and network has been more difficult,” McCully said. Starting a new job in a virtual setting also made it “harder to get yourself across,” at least at first.

Still, while young workers may crave in-person connections and relief from pressures on their health and wellbeing, they remain skeptical of returning to the status quo before COVID-19. Instead they are looking for value and purpose in office-based activities while retaining the right to work remotely. McCully said working from home allowed her to spend time with her young child while remaining professionally productive, and wants that to remain an option.

In fact, more than 60 per cent of employees aged 18-40, who have spent all their adult lives in a tech-centric environment, favor some kind of hybrid arrangement, according to a global survey of 2,000 people by workplace technology provider Citrix.

Offices of the future are seen as “hubs for collaboration, innovation and connection” while staff believe the option of working remotely — not just at home — remains crucial to well-being, the Citrix survey shows. Separately, almost half of millennial and Gen-Z staff say they may even quit their jobs without that option, Bloomberg reported recently.

“I think the office is critical. They key question is why and what for?” said Michael Smets, Professor of Management at Oxford’s Saïd Business School.

Navigating this terrain presents major challenges for executives puzzling over how to design the workplace of the almost-here future. While Wall Street banks including Goldman Sachs Group Inc. and JPMorgan Chase & Co. are pushing ahead with plans to fill offices up again, other companies across a host of sectors are experimenting with hybrid arrangements they hope will offer staff the flexibility many now expect.

Some companies are refitting offices, while others are focusing on upgrading digital infrastructure. Some companies, such as Apple, are telling staff to come in on certain days, a move that led to criticism from the tech giant’s staff.

Few companies claim to have fully solved the puzzle, yet early career professionals stand to lose out the most if disconnection and “artificial silos” are reinforced once offices reopen, Smets said.

Specific groups of employees — notably those with young families or caring responsibilities, who are likely to aim to work from home more often — are at greater risk if they are excluded from organizational culture, said Smets. That could stall or reverse progress made against gender, racial and other inequalities.

As organizations become more mindful of these challenges, they may need to become more disciplined in ensuring information and opportunities are available to all staff, to avoid exacerbating old inequalities or opening up new ones, Smets said.

Helen Jamieson, managing director of human resources consultancy Jaluch, who has focused on hybrid solutions for over a decade, says young workers who may still wish to work mostly at home “don’t understand what they may be missing” in terms of long-term career development.

Jamieson advocates dedicated “collaboration days,” and suggests that new hires and young staff could work mostly from offices during their first six months, before opening up work-from-home options.

The calculus, Jamieson says, is to set aside personal preferences and focus on balancing business needs with a strategy for staff engagement and retention. “Because quite frankly if companies don’t look after young people, they’ll lose them.”

Organizational psychologist Viola Kraus, who worked on Sharp’s European survey, says firms should engage with staff on how they fared over the last year and identify critical needs.

“I’d advise them to really take a step back, review the learning, then have a cross-generational talk within your organization,” she said.

“Companies don’t have to satisfy every employee’s wish, but they need to retain that talent, so they need to open that line of dialogue.”