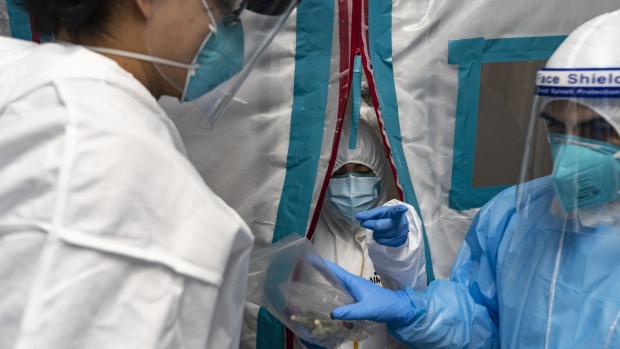 (Bloomberg) -- The Federal Reserve is warning that asset prices in key markets could still take a hit if the coronavirus pandemic’s economic impact worsens in coming months.

Most assets have maintained strong levels so far, as investor appetites increased and the U.S. government intervened to support the nation’s financial system, according to the Fed’s twice-yearly Financial Stability Report released on Monday. The report noted that commercial property values -- which have been particularly sensitive to the pandemic -- have already begun falling.

“Uncertainty remains high, and investor risk sentiment could shift swiftly should the economic recovery prove less promising or progress on containing the virus disappoint,” the Fed said in the report, which is meant to spotlight emerging threats to the financial system. “Some segments of the economy, such as energy as well as travel and hospitality, are particularly vulnerable to a prolonged pandemic.”

Fed Governor Lael Brainard, who has led the central bank’s stability reporting efforts, said the report shows that some of the same nonbank financial sectors that were troublesome in the 2008 meltdown are posing dangers in this crisis, which “highlights the importance of a renewed commitment to financial reform.”

The report noted that hedge fund leverage has remained elevated and said life insurers are reaching debt levels not seen since the 2008 financial crisis.

U.S. equities markets soared Monday on news of progress toward a Covid-19 vaccine and in response to the possible end of political instability with Democrat Joe Biden’s election victory over President Donald Trump. That’s the kind of swiftly-moving sentiment the Fed hopes doesn’t move in the other direction if that progress encounters setbacks.

A vaccine that lessens the virus’s threat would also be vital to commercial real estate. The disease has been a gut punch for retail, office and lodging properties, leaving them with the “highest vulnerability” and much to gain if people begin working, shopping and traveling again at pre-Covid levels, the Fed said.

“If the pandemic persists for longer than anticipated -- especially if there are extended delays in the production or distribution of a successful vaccine -- downward pressure on the U.S. economy could derail the nascent recovery and strain financial markets,” the report said. “Given the generally high level of leverage in the non-financial business sector, prolonged weak profits could trigger financial stress and defaults.”