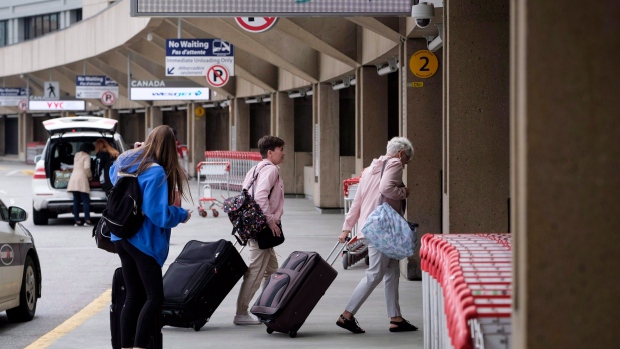 Travelers arrive at the Calgary Airport in Calgary, Alta., Thursday, May 10, 2018. , THE CANADIAN PRESS/Jeff McIntosh

OTTAWA - The Federal Court of Appeal has agreed to hear airlines' legal challenge to Canada's new passenger bill of rights.

The appeal, which aims to quash rules that beef up compensation for travellers subjected to delayed flights and damaged luggage, was filed last month by Air Canada and Porter Airlines Inc. along with 15 other airlines and two industry groups.

They argue the regulations -- effective since July 15 -- exceed the Canadian Transportation Agency's authority and contravene the Montreal Convention, a multilateral treaty.

Under the new rules passengers can be compensated up to $2,400 if they are bumped from a flight and receive up to $2,100 for lost or damaged luggage. Compensation of up to $1,000 for delays and other payments for cancelled flights will take effect in December.

The issue came to the forefront after a 2017 incident in which two Montreal-bound Air Transat jets were diverted to Ottawa because of bad weather and held on the tarmac for up to six hours, leading some passengers to call 911 for rescue.

Lawyers for the federal government and the Canadian Transportation Agency said two weeks ago the government will fight air carriers' attempt to overturn the new rights regime.