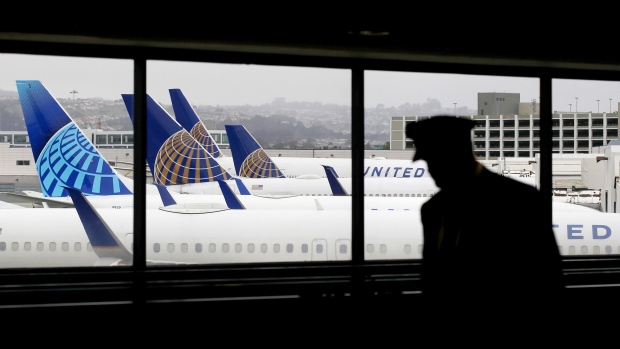 SAN FRANCISCO, CALIFORNIA - APRIL 12: A pilot walks by United Airlines planes as they sit parked at gates at San Francisco International Airport on April 12, 2020 in San Francisco, California. San Francisco International Airport has a seen a huge decline in daily flights since the coronavirus shelter in place. United Airlines, the airport's largest carrier with the most daily flights with 290 flights per day before the start of the COVID-19 pandemic, has reduced their daily flights to 50 per day. (Photo by Justin Sullivan/Getty Images) , Photographer: Justin Sullivan/Getty Images North America

(Bloomberg) -- A federal appeals court rejected an emergency appeal by workers at United Airlines Inc. who are challenging the company’s vaccine mandate.

The ruling came in a two-sentence order issued Monday by the U.S. Court of Appeals for the Fifth Circuit. The court also granted a motion to expedite an appeal in the case.

The lawsuit challenges the airline’s requirements, which include placing unvaccinated workers with a religious or medical objection to its mandate on unpaid leave.

Judge James Ho dissented, saying the company mandate violates a provision in the Civil Rights Act that prohibits employers from discriminating on the basis of religion.