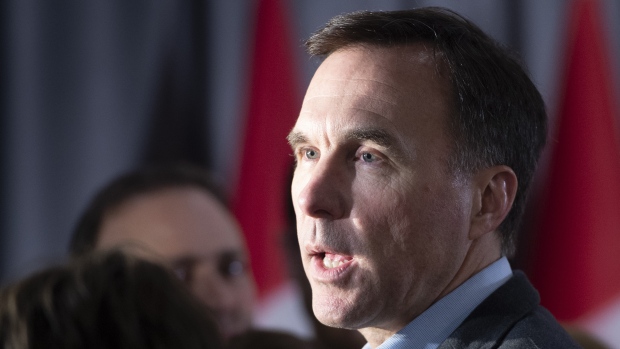 OTTAWA -- The improved economy is expected to give the Trudeau government more fiscal room than anticipated in next week's pre-election budget -- but a wobbly economic finish to 2018 means conditions could look much different as the October vote approaches.

An abrupt deceleration in economic growth over the final three months of 2018 has dimmed the outlook for this year. Last week, the Bank of Canada predicted a weaker economic performance through the first half of 2019, compared to its previous forecast of just a short slump.

Still, the economy posted solid numbers for much of last year and employment has remained particularly strong. Some experts predict it's been enough of a boost to give the Liberal government billions more in fiscal wiggle room.

With extra money, hints of tougher times ahead and an election just months away, the government is expected to use up all that space based on the argument the economy will need stimulative investments.

Scotiabank chief economist Jean-Francois Perrault said larger-than-expected government revenues last year mean Ottawa could have as much as $5 billion more than it had predicted in its November update to dedicate to new pre-election spending, or even tax cuts.

"It's this really fascinating mix of political challenges with some uncertainty on the economic side," said Perrault, a former assistant deputy minister under Finance Minister Bill Morneau.

"The Trudeau government is clearly in more difficulty now (politically) than it was six months ago. They're probably going to be looking for something on the budgetary side that will increase their chances of being elected."

CIBC chief economist Avery Shenfeld also sees the Liberals in a stronger fiscal starting position, but with economic headwinds in the forecast.

"There's good news and bad news, in a sense, for the fiscal path," said Shenfeld, who also noted the effects of an approaching election on budget decisions.

"I'm expecting cheques to go out somewhere. Remember that in the last election the party that won was the one party not promising to balance the budget... The recent sluggishness of the economy is just one more reason to expect a budget that sends out some goodies."

Morneau has said his fourth budget will focus on helping workers get the skills they need and on ensuring seniors feel optimistic about their futures. The government, he added, is looking for ways to make homes more affordable for millennials, while keeping the housing market stable.

The Liberals also intend to use the budget to lay out how they will achieve their two main goals on pharmacare: keeping costs down and ensuring better coverage for everyone.

The budget will also update the country on the state of the federal books, which could prove to be an important ballot-box concern for many voters.

The Liberals' fiscal record has faced regular criticism from the Opposition and some economists. In particular, the Conservatives have targeted the Liberals over their decisions to ditch their 2015 election vow to run only modest annual shortfalls and to eliminate the deficit by 2019.

Instead, the Liberals have posted deficits of more than $18 billion in each of the last two years, with no timeline to achieving balance.

Morneau has shifted his focus to reducing the net-debt-to-GDP ratio -- a way of describing how burdensome debt is, relative to the national economy-- each year.

TD senior economist Brian DePratto recalls how in past budgets the Liberals have enjoyed "growth dividends" because the economy had outperformed expectations. The extra fiscal room enabled them to use up the space without affecting the debt-to-GDP anchor.

This time, however, things are different because the overall economic picture has "clearly degraded," he said.

"It's a little bit of a funny one because there's a lot of these different currents playing out at once that differ a bit from what we've seen in different years," DePratto said.

"There's also the challenge of, well, if we're going into a slower-growth period where the risks are mounting, perhaps there's more impetus for spending regardless of anything else."