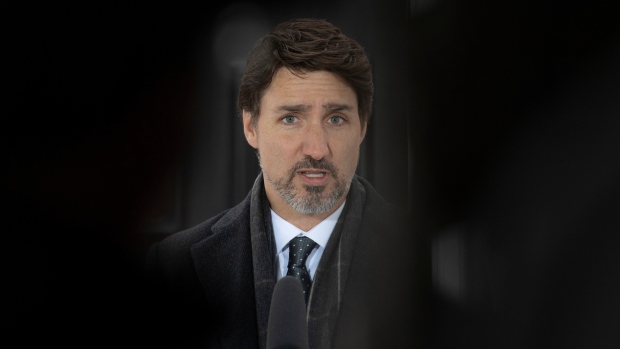 Prime Minister Justin Trudeau speak to the media about the COVID-19 virus in Ottawa, Thursday, March 19, 2020. , The Canadian Press

Canada’s federal deficit will likely blow past $100 billion (US$69 billion) this year, doubling its previous all-time high, as the government takes steps to stave off a recession, according to one economist.

Rebekah Young, director of fiscal economic research at Bank of Nova Scotia, said the current running tally is already about $80 billion. This includes the pre-crisis starting gap of $28 billion, the fiscal impacts of a slowing economy on revenue and automatic stabilizers, along with the $27 billion stimulus package announced by Prime Minister Justin Trudeau on Wednesday.

The government, however, is already indicating it will do more, and Scotiabank believes the stimulus package will probably need to double in order to stabilize the economy, Young said in an interview. This would bring the full-year deficit closer to $110 billion, or just under 5 per cent of Canada’s economy.

The deficit will be “easily more than $100 billion without making too many more assumptions,” Young said, adding all the additional spending is “warranted” given the economic fallout from the coronavirus pandemic. “The risk is going too small instead of too big.”

The previous record in absolute terms was the the $56 billion deficit run by former Prime Minister Stephen Harper in 2009, which was 3.6 per cent of output at the time. The last time Canada’s federal deficit hit 5 per cent of the economy was in the early 1990s.