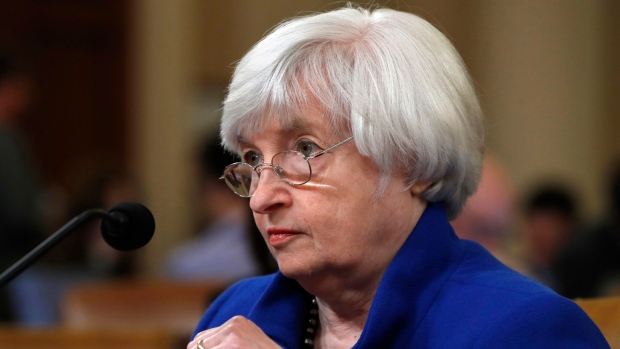 In this Wednesday, Nov. 29, 2017, file photo, Federal Reserve Chair Janet Yellen attends a hearing of the Federal Reserve Board Joint Economic Committee, on Capitol Hill in Washington. , The Canadian Press

WASHINGTON — The Federal Reserve raised interest rates on Wednesday but left its rate outlook for the coming years unchanged, even as policymakers projected a short-term jump in U.S. economic growth from the Trump administration's proposed tax cuts.

In an early verdict on the tax overhaul, Fed policymakers judged it would boost the economy next year but leave no lasting impact, with the long-run potential growth rate stalled at 1.8 per cent. The White House has frequently said its tax plan would produce annual GDP growth of three per cent to four per cent.

The expected fiscal stimulus, coming on the heels of a flurry of relatively bullish data, cleared the way for the U.S. central bank to raise rates by a quarter of a percentage point to a range of 1.25 per cent to 1.50 per cent. It was the third rate hike this year.

But the Fed's forecast of three additional rate increases in 2018 and 2019 was unchanged from its projections in September, a sign the tax legislation moving through Congress would have a modest, and possibly fleeting, effect.

The rate increase represented a victory for a central bank that has struggled at times to deliver on its promised pace of monetary tightening. It also allowed Fed Chair Janet Yellen, at her final press conference before her term ends in February, to signal an all-clear for the U.S. economy a decade after the onset of the 2007-2009 recession.

"At the moment the U.S. economy is performing well. The growth that we're seeing, it's not based on, for example, an unsustainable buildup of debt ... The global economy is doing well, we're in a synchronized expansion," Yellen said. "There is less to lose sleep about now than has been true for quite some time, so I feel good about the economic outlook."

The Fed now envisions a burst of growth, ultra-low unemployment of below four per cent in 2018 and 2019 and continued low interest rates - yet little movement on inflation.

Yellen said the persistent shortfall of inflation from the Fed's two per cent goal was the major piece of "undone work" she was leaving for Powell to figure out.

In its justification for Wednesday's rate increase, which was widely expected by financial markets, the Fed's policy-setting committee cited "solid" economic growth and job gains.

U.S. stocks extended gains after the release of the policy statement before ending mixed, while Treasury yields dropped. The dollar fell against a basket of currencies.

"Changes in tax policy will likely provide some lift to economic activity in coming years," Yellen said, adding that "the magnitude and timing of the macroeconomic effects of any tax package remain uncertain."

The impact would "mainly" work to raise aggregate demand as households and companies have more money to spend, Yellen said, with "some potential" to raise investment and the economy's longer-term growth.

The Fed also said on Wednesday it expected the nation's unemployment rate would fall to 3.9 per cent next year and remain at that level in 2019, well below what is considered to be full employment. It previously had forecast a jobless rate of 4.1 per cent for those two years.

But inflation is projected to remain shy of the central bank's goal for another year, with weakness on that front still enough of a concern that policymakers saw no reason to accelerate the expected pace of rate increases.

"It shows at least some members of the Fed don't see any reason to keep hiking rates in an environment where the economy is growing more strongly but certainly not overheating and where inflation hasn't become a problem and doesn't look like it is going to be one," said Kate Warne, investment strategist at Edward Jones.

Policymakers do see the federal funds rate rising to 3.1 per cent in 2020, slightly above the 2.8 per cent "neutral" rate they expect to maintain in the long run. That indicates possible concerns about a rise in inflation pressures over time