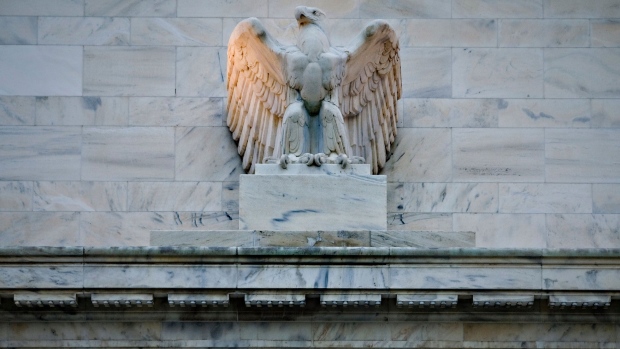 An eagle statue adorns the outside the U.S. Federal Reserve building in Washington D.C. Bloomberg

The U.S. economy kept growing at a modest clip as 2019 drew to a close, while a deterioration in manufacturing employment belied overall tight job market conditions across the country, a Federal Reserve survey showed.

“A number of Districts reported job cuts or reduced hiring among manufacturers, and there were scattered reports of job cuts in the transportation and energy sectors,” according to the report released Wednesday.

The central bank's Beige Book economic report, based on anecdotal information collected by the 12 regional Fed banks through Jan. 6, also showed inflation at the consumer and producer levels “continued to rise at a modest pace.”

The Beige Book, prepared by the New York Fed, supports central bankers' December decision to leave interest rates unchanged following three cuts in 2019. Most officials favored keeping rates on hold for all 2020, their projections showed, unless there was a material change in the economic outlook.

Despite weaker activity and employment at the nation's factories, the labor market overall “remained tight,” with most districts citing “widespread labor shortages as a factor constraining job growth.” Unemployment stood at a half-century low of 3.5 per cent in December.

The Federal Reserve Bank of Atlanta reported wage pressures remained “for lower-skilled positions, and some contacts expect higher wages in the coming year.” In the San Francisco Fed's district, a few contacts said that worker shortages were a “significant” obstacle to companies' ability to expand.

In the San Francisco Fed district, many firms including professional service providers and financial companies, reported raising prices due to higher labor costs. At the same time, firms in technology and retail said competition was limited their ability to pass through wage increases.

“Those Districts reporting on price expectations indicated that prices were expected to continue to rise in the months ahead,” the Beige Book said.

The Fed’s preferred gauge of price pressures excluding food and energy rose 1.6 per cent in the year through November. Inflation has run persistently below the central bank’s two per cent target for most of the past seven years.