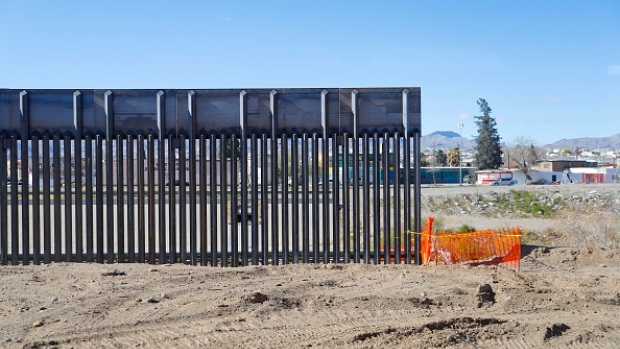 An incomplete section of border fencing as seen from the Texas side during Acting Secretary of Defense Patrick Shanahan's tour of the US-Mexico border February 23, 2019 in El Paso, Texas. Shanahan will visit troops on the border and sites where the Department of Homeland Security has requested Pentagon assistance to combat drug smuggling. , Pablo Martinez Monsivais - Pool /Getty Images

U.S. Customs and Border Protection has put up just 1.7 miles of fencing with the US$1.57 billion that Congress appropriated last year for President Donald Trump’s wall along the Mexican border, a federal judge was told.

A lawyer for the Democrat-controlled U.S. House of Representatives provided the information Tuesday to the judge in Oakland, California, who is weighing requests from 20 state attorneys general and the the Sierra Club to block Trump from using funds not authorized by Congress to build the wall.

"The administration recently provided updated information to Congress on the status of its efforts as of April 30, 2019," the attorney, Douglas Letter, said in a court filing. "Based on that updated information, it appears that CBP has now constructed 1.7 miles of fencing with its fiscal year 2018 funding."

That was 3/4 of a mile more than the administration reported at the end of February, Letter said.

U.S. District Judge Haywood Gilliam had asked for the information at a May 17 hearing.

May.15 -- Marriott International Inc. President and Chief Executive Officer Arne Sorenson tells David Rubenstein that the world sees the United States as "less welcoming" than it used to as a result of President Trump's rhetoric and policies and that has negatively impacted the hospitality industry. His comments come in the latest episode of "The David Rubenstein Show: Peer-to-Peer Conversations."

That includes 14 miles of new and updated wall panels near San Diego, which is expected to be finished early next year, and 13 miles of new construction in the Rio Grande Valley. It’s not clear when that part will be finished.

The report doesn’t state how much of the $1.5 billion has been spent to date, and doesn’t contradict Letter’s claim. The U.S. Army Corps of Engineers did hand out more than $800 million of the 2018 funding for new contracts, according to the report.

Contracts also have been awarded for 41 miles of new wall to replace pedestrian fencing in San Diego and Calexico, California, and Yuma, Arizona, which should be completed late next year, according to the report. Another 12 miles of new wall in the Rio Grande Valley requires additional consulting with local officials, the report said.

President Donald Trump also commented on the progress of the wall construction on Twitter Wednesday, saying “tremendous work is being done.”

In all, $6.1 billion in funding has been committed since 2017 for the wall, both to Customs and Border Protection and the Defense Department, for 336 miles, according to the report.