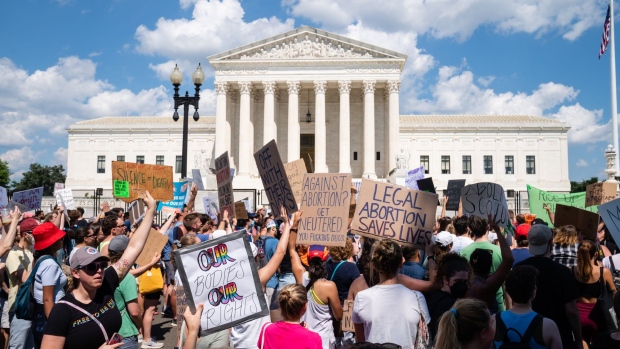 Abortion rights demonstrators chant outside the US Supreme Court in Washington, D.C., US, on Saturday, June 25, 2022. The US Supreme Court overturned the 1973 Roe v. Wade decision Friday and wiped out the constitutional right to abortion, issuing a historic ruling likely to render the procedure largely illegal in half the country. , Bloomberg

OPM issued a FAQ document on Monday that doesn’t explicitly mention abortion, but said employees who “find it necessary to travel longer distances, including out of state, to obtain medical care” can use sick leave. The document also clarifies that employees don’t have to provide a reason for leave under three days, and for longer absences, a doctor’s note “need not contain details regarding the medical examination or treatment.”

Federal workers can also use sick leave to accompany family members to obtain care in another state, the guidance said.

Since the Roe decision on Friday, many private-sector employers including Walt Disney Co., JP Morgan Chase & Co., and Dick’s Sporting Goods Inc. have said they would cover travel expenses for employees who need abortions but live in states that ban the procedure.

At least 22 states already have laws on the books that significantly restrict or fully outlaw abortion, with others likely to move quickly in that direction following the court ruling. Sixteen states and the District of Columbia have laws protecting abortion rights.

Biden’s Department of Health and Human Services is currently reviewing what it can do to assist women seeking to terminate their pregnancies, including possible transportation assistance.

“We’re looking at every option, and among those is transportation,” Health and Human Services Secretary Xavier Becerra said Saturday at the Aspen Ideas: Health conference.

The president on Friday said he had ordered the department to ensure abortion drugs are available “to the fullest extent possible,” while requesting the Justice Department intervene should officials in states that ban abortion try to prevent people from traveling to obtain the procedure.