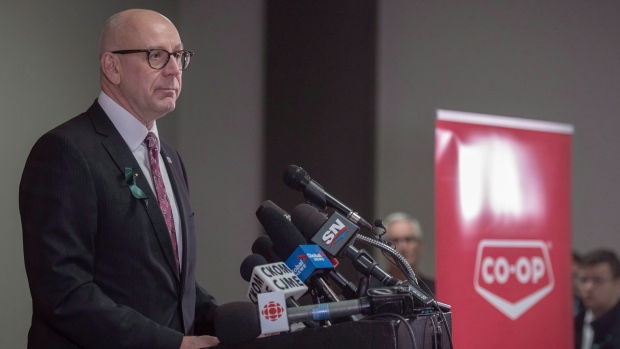 CALGARY -- Federated Co-operatives Ltd. says a decision by Calgary Co-op to switch to Save-on-Foods as its grocery supplier means it will have to close its Calgary distribution centre at the cost of just over 200 jobs.

The Saskatoon-based co-operative owned by more than 170 retail co-ops across Western Canada says the warehouse operation in southeast Calgary will close next April when Calgary Co-op makes the supplier switch it announced last summer.

In a statement, Federated executive vice-president Vic Huard says the shutdown was an "avoidable development" that will add to the city's current "significant" economic challenges.

He says Calgary Co-op's decision to access groceries from a competitor means it will no longer receive annual profit-sharing from Federated that amounted to about $186 million over five years from 2014 to 2018.

He adds the withdrawal will result in a $400-million annual reduction in FCL's revenue from wholesaling, manufacturing and other services, which will have a negative effect on returns to its other co-op partners.

In an announcement placed on its website in August, Calgary Co-op said the supplier switch was one of several changes driven by customers' desire for "choice, quality and everyday value," adding there would be a new emphasis on local and healthy food offerings and a new line of private label groceries starting next spring.

Earlier this month, it announced it would buy independent Calgary grocer Community Natural Foods, which specializes in organic groceries.

"There's been a Co-op warehouse in Calgary for 70 years and we know that the negative repercussions of this decision will be felt for a long time in Calgary," said Huard.

"Calgary Co-op members have contacted us asking how this decision to move to a competitor happened without Calgary Co-op's members being consulted. That's not something we can answer."