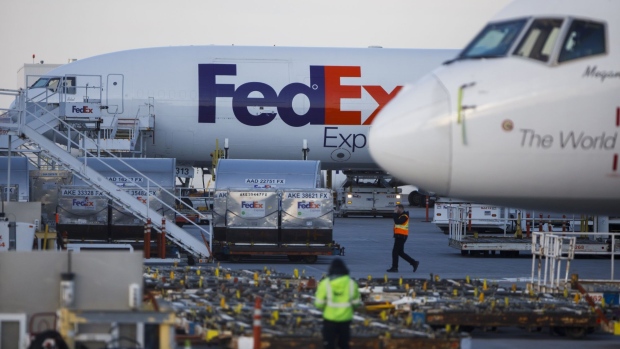 FedEx Corp. is seeing a recovery of industrial shipments and hiring 4,000 workers a week to handle a flood of e-commerce packages, making Chief Executive Officer Fred Smith “more optimistic than most” about an economic rebound.

The courier needs the extra help to deal with surging residential deliveries as customers order goods online from their homes instead of venturing out amid the coronavirus pandemic, Smith said Thursday in a webcast interview with the Washington Post. On the industrial side, business hit bottom in mid-April and “there’s still a significant amount” of factory activity, Smith said.

“It hasn’t collapsed, which I think is what a lot of people thought,” he said. “I’m optimistic that there’s enough economic activity that we can build on. And assuming that the medical folks deal with the disease itself competently, I’m more optimistic than most.”

FedEx’s need for workers makes the company a relative bright spot for the U.S. economy, in which 36.5 million applications for unemployment insurance have been filed since the virus began shutting down businesses in mid-March. Many factories producing consumer goods, food, medical goods and defense equipment have kept working through the pandemic. Sectors such as construction and landscaping have continued in many states.

The biggest damage, Smith said, has been to activities that tend to generate crowds, including airlines, hotels, restaurants and entertainment.

Massive government spending to help people through the pandemic is “a necessary evil” and “Keynesian economics on steroids,” Smith said. Rising protectionist sentiment is a greater danger, he said.

FedEx has spent “enormous amounts of money” on protective equipment for workers, Smith said. The company came under fire-- including from U.S. Senator Cory Booker -- after five workers died of COVID-19 at a FedEx hub in Newark, New Jersey.

Smith, who said his best friend died of the disease three weeks ago, said the company’s experience at its Newark hub “is actually slightly better, as best as we can tell,” than what the surrounding community had suffered.

“As an essential business there’s no way we can be divorced from the community issues that we work in,” he said.