FedEx Corp. fell as a plan to bolster investment signaled potential pressure on the company’s profit.

Capital expenditures will total US$7.2 billion during fiscal year 2022, which ends on May 31, FedEx said in a statement Thursday. That’s more than US$1 billion higher than the previous year’s investment figure and above expectations on Wall Street, where investors have been raising their bets on a profit bonanza from rising prices and booming residential package deliveries.

"The capex is higher than consensus by about US$800 million, which isn’t anything to sneeze at," said Lee Klaskow, an analyst at Bloomberg Intelligence. "They need to spend more because their networks are stressed with the surge of freight that we’re seeing."

FedEx is trying to build on a banner year after the COVID-19 pandemic drove more people to shop online instead of buying in stores, spurring record demand for shipments to homes. But the residential business tends to be less profitable than commercial deliveries, and FedEx has been investing in efficiency in a bid to reap greater rewards in the long term. The company’s planned increase in spending means that its investment binge of recent years is far from over. 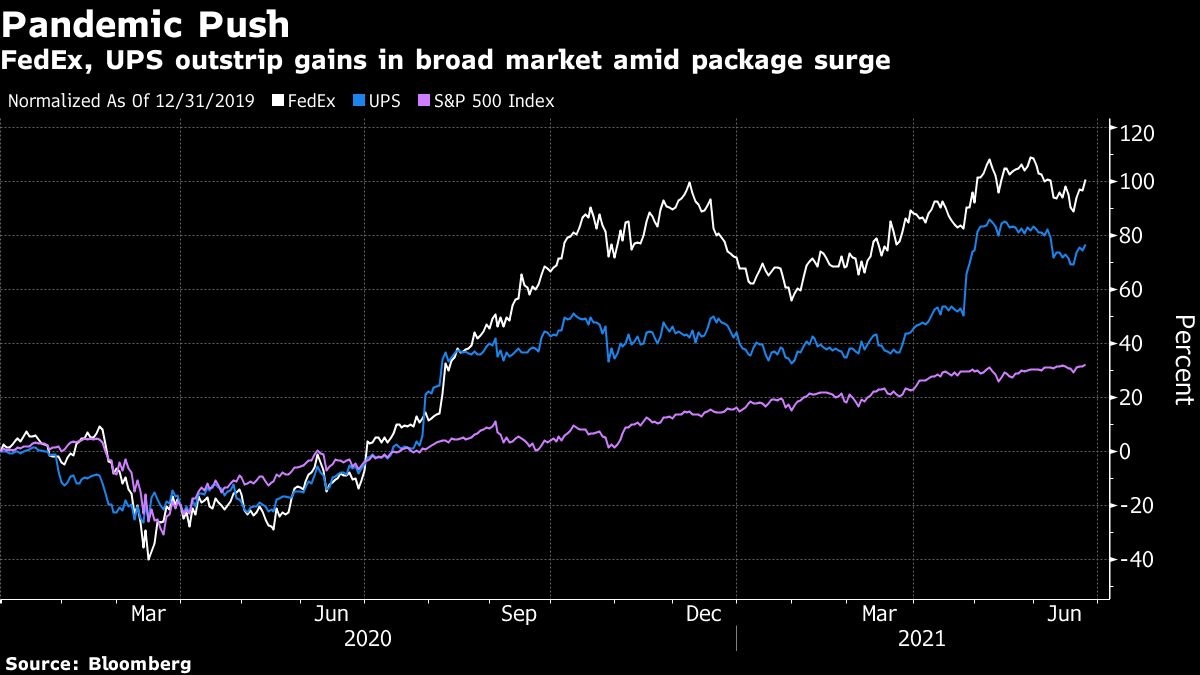 The shares fell 4.2 per cent to US$290.80 after the close of regular trading in New York. FedEx climbed 17 per cent this year through the close while an S&P index of U.S. industrial companies advanced 15 per cent. United Parcel Service Inc. gained 22 per cent during the same period.

Amid the surge of packages and aggressive price increases, both FedEx and UPS have struggled to live up to investors’ high expectations for profit growth. UPS shares fell the most in seven months on June 9 when Chief Executive Officer Carol Tome’s financial forecast disappointed shareholders.

FedEx predicted adjusted earnings of US$20.50 to US$21.50 a share for fiscal year 2022. Analysts had expected US$20.48, according to the average of estimates compiled by Bloomberg -- a number that had already risen a dollar a share since mid-April on optimism that hefty demand would continue even as the pandemic eases.

"I would view their earnings estimate of US$20.50 to US$21.50 as conservative," Klaskow said. "The Street was probably hoping for something with a little bit more sizzle than that."

FedEx expects operating margins to improve in fiscal year 2022, CEO Fred Smith told analysts and investors on a conference call to discuss earnings. Sales are expected to exceed US$90 billion.

In FedEx’s fourth quarter, adjusted earnings climbed to US$5.01 a share, a penny above analyst estimates. Sales jumped 30 per cent to US$22.6 billion, compared with analysts’ estimate of US$21.5 billion. The company called out higher costs related to "constrained labor availability" as one of the reasons that earnings were only slightly above expectations while sales handily surpasses estimates.

For its fiscal 2021 as a whole, adjusted earnings almost doubled to US$18.17 a share. Profit in fiscal 2020 was the lowest in six years as FedEx invested heavily to revamp its ground network in an effort to handle residential deliveries more efficiently.