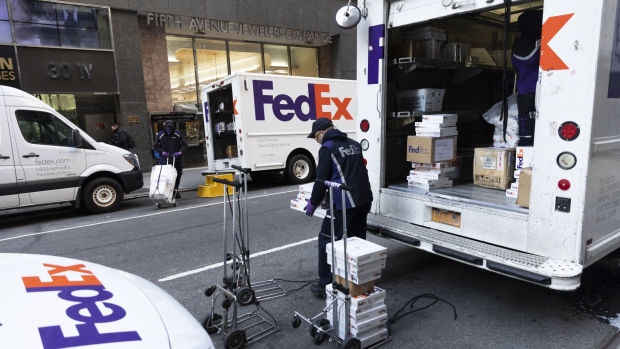 A FedEx Corp. courier prepares packages for delivery during Cyber Monday in the Diamond District neighborhood of New York. , Bloomberg

(Bloomberg) -- FedEx Corp. expects to grow earnings per share as much as 19% annually over the next three years by targeting “high-value” customers and squeezing more efficiency out of its networks.

The three-year plan, the first strategic outlook under new Chief Executive Officer Raj Subramaniam, also calls for annual sales growth of up to 6%, even as package demand begins to slow following torrid growth early in the pandemic. Subramaniam took over as CEO on June 1 from founder Fred Smith, who remains as executive chairman.

The company will also reduce capital spending to 6.5% of revenue or less, according to a statement Wednesday, a sign that FedEx will shift emphasis to boosting profit margins over increasing sales. FedEx expects adjusted operating profit margins to be 10% during the three-year period.

Subramaniam will have to steer FedEx through the post-pandemic economy in which consumers are spending more on services and in stores, causing a slowdown in e-commerce package growth. It’s unclear if the courier will retain the robust pricing power that has driven up revenue per package by 23% at express and 19% at ground in three years.

The details of Subramaniam’s strategy fleshes out moves the company recently announced, including a 53% dividend increase, a pledge to cut capital spending and an agreement with an activist investor that named two new board member.