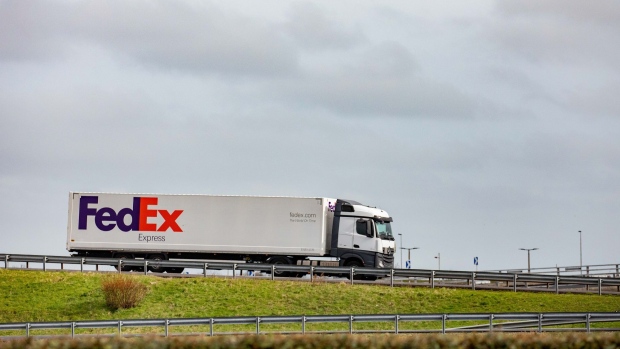 A cargo truck, operated by FedEx Corp., travels on a highway near the French border in Calais, France, on Monday, March 18, 2019. French cabinet last month approved a decree that would keep Eurostar trains running through Eurotunnel's Channel tunnel in the case of a so-called Hard Brexit. , Bloomberg

The forecast signaled deepening trouble for the courier as the U.S. and China battle over tariffs -- which has also ensnared manufacturing giants such as Caterpillar Inc. and Deere & Co. FedEx, which had announced an employee-buyout program in January, said it would pare its cargo-jet fleet to contend with the diminished expectations.

“The global economy continues to soften and we are taking steps to cut capacity,” Chief Executive Officer Fred Smith said in a conference call to discuss earnings late Tuesday. The slowdown is being “driven by increasing trade tensions and policy uncertainty.”

Analysts, however, said some of FedEx’s problems were of its own making.

President Donald Trump’s trade maneuvers are tormenting Smith, a free-trade advocate and longtime Republican donor who has sounded the alarm quarter after quarter that tariffs would hurt economic growth. Commercial tensions are complicating FedEx’s costly integration of a European acquisition and putting the company under the microscope of the Chinese government. FedEx is also girding for a revenue drag after severing most ties with Amazon.com Inc.

The shares tumbled 10 per cent to US$155.29 before the start of regular trading in New York on Wednesday. The drop wiped out FedEx’s year-to-date gain and spurred declines at rivals such as United Parcel Service Inc. and Germany’s Deutsche Post AG. FedEx was already trailing the returns this year of UPS and a Standard & Poor index of U.S. industrial companies.

“In reality, FedEx’s release is largely the result of many management missteps over the years, including overspending on aircraft despite weaker returns in Express over the long-term, and acquisition debacles,” he said in note to investors.

The U.S.-China trade war has weighed on manufacturers, disrupting a key market for FedEx. A surge in industrial jobs seen in the first two years of Trump’s presidency has reversed in parts of the country, and there’s evidence that some corners of the U.S. economy are sliding toward recession. Companies have slowed business investment and capital expenditures as uncertainty over trade policies has clouded the outlook for future growth.

For FedEx, the weaker outlook underscored the hurdles as the company introduces costly changes to its ground network to handle surging e-commerce deliveries while contending with rising competition from Amazon.

FedEx stuck with its plan to invest US$5.9 billion for fiscal year 2020, which ends in May, and will probably match that in 2021, Chief Financial Officer Alan Graf said on the call. The company needs to spend on new aircraft and to modernize sorting hubs, Graf said.

But to reduce capacity at the Express air-shipping network, FedEx will retire as many as 20 older planes and park additional aircraft as it adjusts to the weaker economic outlook. The company already announced a US$575 million employee-buyout program in January.

The Memphis, Tennessee-based company failed to renew contracts with Amazon for U.S. ground deliveries and air shipments as the e-commerce retailer builds out its own transportation network.

The move will dent FedEx’s sales since Amazon had accounted for about 1.3 per cent of annual revenue. But FedEx is betting that the decision will boost profit margins because the business fetched below-average prices.

Earnings are already under pressure from the weaker global economy.

The courier’s best-case scenario for adjusted earnings in the fiscal year ending in May was only US$13 a share -- a dollar short of the lowest of 25 analyst estimates compiled by Bloomberg. The forecast implied at least a 16 per cent drop from the previous year’s level. FedEx had predicted in June a decline of a “mid-single-digit percentage point.”

In the fiscal first quarter, adjusted earnings dropped to US$3.05 a share, FedEx said in a statement. That trailed the US$3.15 average of analyst estimates complied by Bloomberg. Sales were little changed at US$17 billion. Operating income fell 8.8 per cent to US$977 million in the quarter. Operating margins narrowed to 5.7 per cent from 6.3 per cent.

An economic slowdown in Europe is hampering FedEx’s effort to turn around operations at TNT Express, a Dutch company acquired in 2016 for US$4.8 billion. Integration spending will be about US$350 million over the 12-months ending in May 2020, FedEx said in June, pushing the expected total to about US$1.7 billion by May 2021.

For now, the company is running both the TNT and FedEx networks in Europe, which drives up costs, said Seaport’s Sterling.

In China, FedEx has been under scrutiny in recent months after Huawei Technologies Co. said documents that it asked to be shipped from Japan to China were instead diverted to the U.S. without authorization.

In another incident, FedEx said it mistakenly rejected a package containing a Huawei phone being sent to the U.S. from the U.K., a claim China rebuffed.

Earlier this month, China said it was investigating FedEx on suspicion of illegally handling a package to Hong Kong containing knives that are controlled by law, according to a report by state-run Xinhua News Agency.