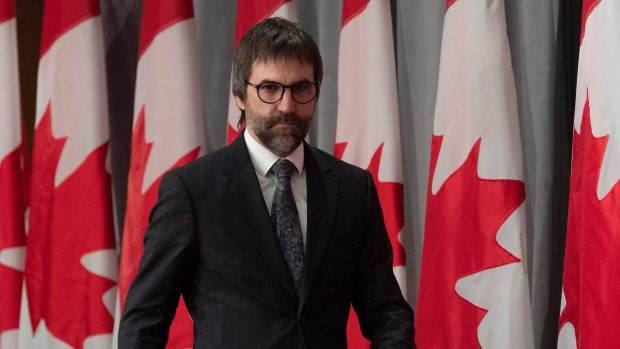 Minister of Canadian Heritage Steven Guilbeault makes his way to his seat for a news conference in Ottawa, Friday, April 17, 2020. , The Canadian Press

Heritage Minister Steven Guilbeault unveiled early plans on Friday to give $500 million to Canada’s arts, sports and cultural sectors as they weather the COVID-19 pandemic — but exactly who will benefit remains to be determined.

Each one will likely be clamouring for a helping hand as the fallout from the virus affects every aspect of the industry from live venues to book sales, film production schedules to revenue at newspapers.

“We will be looking at where that funding can have the most beneficial impact in those sectors,” Guilbeault said in an interview.

“Because we recognize some of the measures, should it be the wage subsidy or the emergency benefit, or even some of the credits programs that we’ve established, aren’t necessarily adapted to those sectors.”

Prime Minister Justin Trudeau acknowledged as much in his Friday press briefing, as he directly addressed the financial difficulties facing the entertainment industry.

“We need our artists to continue to make us dream, particularly in dark times,” he said.

Earlier in the week, Trudeau expanded the reach of the Canada Emergency Response Benefit to include support for people who are still working, but earning $1,000 or less per month, meaning that musicians and other artists could qualify.

The move by Heritage Canada is intended to address “independent workers” as well, Guilbeault said, but would be aimed more at the organizations that employ them.

Support for the non-profit sector would go towards associations who he described as “in some cases too small… to get extra credit from their bank or an extra loan,” as well as arts groups such as Factor and Musication, which specialize in developing and supporting Canadian music talent.

The minister says assistance for the media sector will be focused on “smaller news outlets” across the country that have been decimated by the virus. In particular, community and local newspapers with one or two employees would be part of the focus, he added.

“Often people are on contracts, or they can’t really benefit from the wage subsidy, because they’re not employees,” he said.

“I know people would like to have details and unfortunately, we’ve been working really hard to finalize the emergency fund… and get everything through the finance and Prime Minister’s office. So we haven’t been able to establish criteria, but we will be coming up with those in the near future.”

Guilbeault said Heritage Canada intends to consult further with the entertainment and sports industries to “fine tune” how the money will be doled out. He said his department is already working with the Canada Council for the Arts, which has conducted its own consultations with the arts and culture community.

However, he added, a timeline for when the payments will roll out is still uncertain.

The entertainment industry is facing an onslaught of questions about its future as some health experts suggest live gatherings may not return to normal until late 2021.

Guilbeault acknowledged that Canada is “most likely looking at months” before major events could resume.

“This is something we’re cognizant about and that’s in the back of our mind,” he added.

“But it’s not something we’ve started working on and planning for at this point. We will need to, but right now we’re still very much focused on the crisis and helping our partner organizations.”

The federal government also intends to mark Canada Day with virtual celebrations this summer in place of the traditional gathering on Parliament Hill.

Most of those plans are still in the works, Guilbeault added, saying the preliminary announcement was made to set the stage for more details in the weeks ahead.

“We felt we had to announce it so that people could start thinking about it,” he said. “I think people had already started shifting gears.”