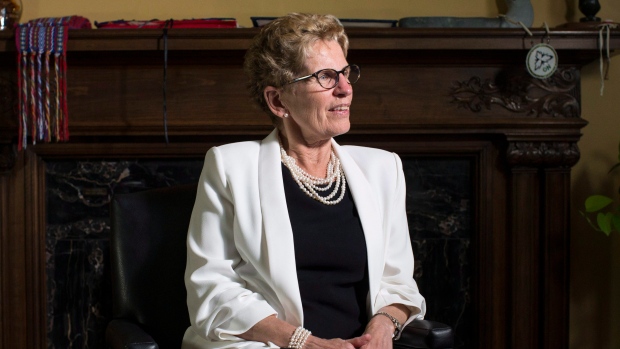 Ontario Premier Kathleen Wynne is photographed in her office in the Queens Park Legislature , The Canadian Press

Finance ministers are narrowing their differences over pension reform ahead of a key meeting in Vancouver that will determine whether there’s enough support to expand the Canada Pension Plan.

A flurry of phone calls, face-to-face meetings and letter ex-changes is taking place between Ottawa and the provinces as federal Finance Minister Bill Morneau attempts to find consensus for change in the face of several reluctant provinces.

Ontario Premier Kathleen Wynne, the leading advocate for major reform, appeared to soften her position Wednesday by suggesting the province would scrap its new provincial pension plan if a national deal is reached that delivers two-thirds of what the Ontario Retirement Pension Plan would offer.

A deal may require even further compromise. In an interview with The Globe and Mail, Quebec Finance Minister Carlos Leitao rejected Ms. Wynne’s characterization that Canada’s pension system is in crisis, and said any CPP enhancement should be small and targeted at middle-income earners.

“This is not an issue that we would have raised. I don’t think there’s any sort of crisis in our public pension system,” he said.

“There’s always room for improvement and we are, of course, willing to participate and co-operate in that process of improving our public pension system.”

Mr. Leitao said any change should be modest, targeted and phased in gradually over time. Similar comments are being expressed this week by other provinces, including British Columbia, which has also been ambivalent regarding CPP reform.

“A modest Canada Pension Plan expansion, when economic conditions permit, would make a positive contribution to the retirement income security of future generations of Canadians,” Jamie Edwardson, a spokesman for B.C.’s Finance Ministry, said in a statement on Wednesday. “In looking at reform options, B.C. wants to see consideration given to changes that will have a positive and meaningful impact on the retirement income of middle-income earners, while protecting lower-income earners.”

Some business groups have recently urged the finance ministers to reach a deal as a way of avoiding Ontario’s ORPP, which they fear would impose higher payroll costs on employers compared with a more targeted national enhancement.

Ottawa has promised to reach a deal this year with the provinces and territories to expand the CPP. Finance ministers from across the country agreed in December to have officials work on options and they will meet again Monday in Vancouver to review that work. Ottawa is hoping to reach a final agreement by December.

Change requires the support of seven of 10 provinces representing two-thirds of the country’s population. Quebec is part of the formula, even though it operates the Quebec Pension Plan independently. The program is similar to the CPP but has slightly higher contribution rates. Mr. Leitao said his province already has the highest payroll taxes in the country and will be reluctant to impose new deductions.

Saskatchewan Finance Minister Kevin Doherty said in an interview that his government remains opposed and that there may be others.

“I think it’s fair to say that at the December meeting, we were singled out as kind of leading the parade for the naysayers, if you will, but there was significant opposition in that room, from my recollection, to making any changes at that time,” he said.

Manitoba’s new Progressive Conservative government said in a statement that the province looks forward to “a constructive dialogue” on pensions and will ensure “that the businesses that create jobs aren’t overly burdened by payroll taxes.” Alberta Finance Minister Joe Ceci said in an interview that Albertans want better pension coverage, but any change should be phased in over time in light of the province’s struggling economy.

“We developed the ORPP plan because we had a previous federal government that wasn’t interested in having this discussion about a retirement security crisis across the country. Now we have a federal government that is interested,” she said. “And so we’ve said if we can get to sort of two-thirds of the value of what we’ve worked up with the Ontario Retirement Pension Plan, that’s one of the metrics that we would look at for a CPP enhancement.”

Ontario Finance Minister Charles Sousa said in an interview that targeting two-thirds of ORPP benefits is an example of the type of compromise the province is willing to make in order to reach a national consensus.

“I’m more encouraged now than I’ve ever been in the discussions that we’re having,” he said.

Under the current CPP, employers and employees each contribute 4.95 per cent of income between $3,500 and $54,900. Critics of the status quo argue that even for those who make the maximum contributions every year, the maximum CPP benefit is just $13,110, a figure that is regularly adjusted for inflation.

The ORPP would require contributions of 1.9 per cent each from employees and employers on income between $3,500 and $90,000, with a maximum annual benefit in retirement of about $12,815, in addition to CPP.

The debate over retirement savings is largely due to the declining percentage of private-sector employers having pension plans that offer a defined benefit for life in retirement.

The ORPP is scheduled to begin a phased-in launch on Jan. 1, and would focus on employees of companies that do not offer workplace pension plans that meet specific criteria.

Quebec’s Mr. Leitao said he agrees with the many academics, and business and citizen groups that have argued against raising premiums on low-income Canadians because it could simply lead to a loss of benefits in retirement, such as the Guaranteed Income Supplement. The Canadian Labour Congress continues to advocate for a broad-based change.