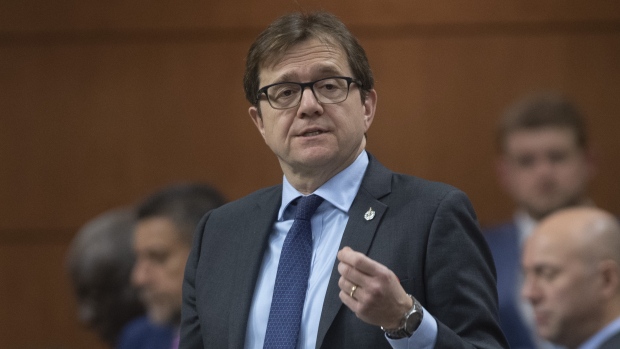 Environment and Climate Change Minister Jonathan Wilkinson responds to a question during Question Period in the House of Commons Tuesday March 10, 2020 in Ottawa. Wilkinson says he intends to scale back the government's planned Clean Fuel Standard in the short term to give the fossil fuel industry a bit more time to recover from the pandemic-induced economic collapse. , THE CANADIAN PRESS/Adrian Wyld

OTTAWA -- Environment Minister Jonathan Wilkinson is scaling back the government's planned Clean Fuel Standard in the short term to give the fossil fuel industry a bit more time to recover from the pandemic-induced economic collapse.

But Wilkinson says to make up for less stringent emissions reductions in the beginning, fuel producers will have to do more to green up their gasoline and diesel fuels starting in 2026.

Wilkinson says given the tough situation facing the fuel industry due to COVID-19, the government believes the changes will help the industry without harming the government's long-term climate objectives.

The Clean Fuel Standard is one of the biggest items in the list of things Canada is doing to meet its Paris agreement targets of reducing overall emissions to 70 per cent of what they were in 2005 by 2030.

The standard will require a reduction in the total emissions produced by liquid, gaseous and solid fuels.

The changes Wilkinson is making means the reductions required between 2022 and 2025 will be slightly lower than previously proposed, with the requirements after 2025 much higher so that the same overall impact is felt by 2030.