The federal government is taking sharper aim at real estate investors and property flippers in a bid to help halt the country’s long-standing – and worsening – housing affordability problem.

In the federal budget, government officials laid out what is, essentially, a three-pillar strategy to deal with Canada’s housing crisis by limiting real estate investment, helping first-time homebuyers, and allocating more funds to accelerate the construction of more homes.

The government expects the plan will have a cumulative cost of $10.1 billion by fiscal year 2026-27.

“In some respects, from a federal perspective, this is a federal budget that tries to tackle the problem [of affordability], and maybe more so than we’ve seen in the past,” said Pedro Antunes, chief economist with the Conference Board of Canada, by phone.

Deputy Prime Minister and Finance Minister Chrystia Freeland said the housing file has both social and economic implications for the country.

“It's absolutely essential that young Canadians feel that owning their own home is within reach. And we're at risk right now of being a country where that is not possible. So this budget really is about tackling the logjam in building the homes that Canada needs,” Freeland said in a taped interview on Thursday, which will air in full on BNN Bloomberg on Friday.

“I really want to be clear that it's about that kind of medium and long term strategy, as well as about meeting the immediate affordability challenges that Canadians face,” she added.

For the feds, improving affordability means cracking down on real estate investment.

The government is looking to ban foreign companies and individuals who are not Canadian citizens or permanent residents from buying investment properties for two years, with exemptions for international students and refugees. The measure was first reported by CTV News Tuesday night, and is a follow-up to a pledge made during last year’s election campaign.

There’s little concrete data about the prevalence of foreign money in Canada’s housing market and the impact it has on supply and prices, but the feds said it would monitor the situation and is leaving the door open to strengthening the ban’s enforcement if warranted.

It comes on the heels of recent moves by the governments of Ontario and Nova Scotia to curb foreign investment in their real estate markets.

“We will do everything we can to make the market fairer for Canadians. We will prevent foreign buyers from parking their money in Canada by buying up homes. We will make sure that houses are being used as homes, rather than as commodities to be traded,” Freeland said in the budget Thursday.

“But on housing, I would like to offer one caution: There is no silver bullet which will immediately, once and forever, make every Canadian a homeowner in the neighbourhood where they want to live.”

Property flippers have also made it onto the federal government’s radar. The feds are aiming to introduce rules to fully tax profits on homes that are sold within 12 months of being purchased, as the capital gains will be considered business income. Exemptions to the rule will be homeowners who experienced major life events such as the birth of a child, divorce, death, disability or a new job.

Assignment sales – which involve homes being resold before they’re constructed or occupied – are also on the table, with the government looking to charge GST/HST on all assignment sales effective May 7 of this year.

Lastly, some changes could be in store for Bay Street’s real estate investment trusts.

The feds are planning a review of housing as an asset class to determine how major rental apartment corporations impact the market – building on a promise in the Liberal Party’s fall election campaign.

The budget indicates the review will take into account how “large corporate players” are taxed, though it said more details on the review would be released later this year.

Skyrocketing home prices are continuing to price out regular Canadians, particularly younger buyers. The latest data from the Canadian Real Estate Association showed its home price index rose by a record 3.5 per cent in February on a monthly basis. As an example of just how expensive some of the country’s hottest markets have become, RBC Economics estimated in a report in late March that owning a detached home in Vancouver would have eaten up almost the entirety of a median pre-tax household’s income in the fourth quarter. 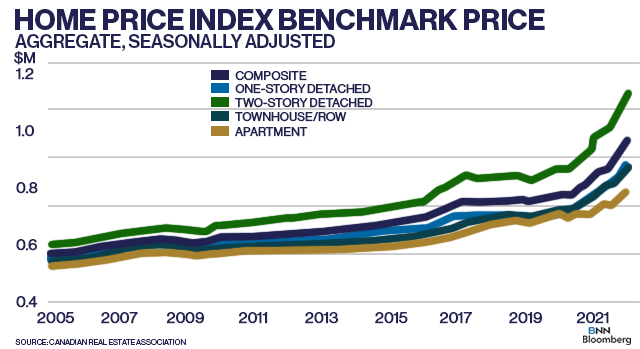 The federal government is proposing a Tax-Free First Home Savings Account for first-time homebuyers to save up to $40,000, starting next year. The account aims to combine aspects of an RRSP and a TFSA in that contributions to the account are tax-deductible from your income and withdrawals, including any investment gains, are non-taxable.

The budget also proposes a doubling of the First-Time Home Buyers’ Tax Credit to allow for a maximum $1,500 credit, and would be retroactive to the start of this year, at an overall cost of $675 million over the next five fiscal years.

However, despite these measures, rising interest rates will likely prove to be a setback for these very same homebuyers, according to Antunes.

“In the last few weeks, we’ve seen central banks stepping up in terms of tightening monetary policy so shorter-term rates, like the one- to three-year rates and five-year rates, have come up steeply, and I think that’s going to be a challenge that outweighs a lot of the measures that they’re trying to do to ease affordability pressures,” he said.

“Rising rates will lower demand in some respects and hopefully take some price pressure off, and I do think those are the market forces we’ll see from rising rates that could have more impact than some of these measures, but that’s not to say these measures aren’t worthwhile.”

The government is also looking to end blind bidding – a practice where prospective homebuyers don’t have visibility into competing bids – which housing critics have said can lead to buyers overpaying for a property.

The feds flagged the lack of supply as the biggest issue impacting affordability. It estimates Canada will need 3.5 million new homes by 2031 to address the gap between the country’s growing population and the current housing stock.

Calls for more supply, rather than suppressing homebuyer demand, have been loud and clear from real estate industry stakeholders for a number of years amid elevated sales activity.

One of the biggest initiatives from the government to address inadequate supply is the launch of a new Housing Accelerator Fund. It aims to make a total of $4 billion available to cities and towns over five years to support approvals, funding and the delivery of new homes. The feds estimate the fund will help create 100,000 new housing units over that time span.

Despite the trend of increased home construction in recent years, including record housing starts in 2021, the government is targeting a doubling of the current rate of construction over the next decade, but said collaboration will be needed among all three levels of government.

That could be easier said than done in an economy where both labour and materials are in short supply, Antunes said.

“Housing is a privately-delivered good,” he said.

“Here’s the challenge: even as we spoke to developers last year, we knew they were having challenges in completing their home starts. So the other challenge that plays out with this is the supply constraints in terms of the workforce, in terms of materials. How do you ramp up supply at a time when the market is already hot? It’s going to be a challenge.”