We need a budget strategy focused on growth: Business Council of Canada CEO

The federal government has set a date for its first full budget bill in more than two years.

Finance Minister Chrystia Freeland announced Tuesday in the House of Commons that she will table the budget April 19, as the feds look to plot Canada’s course through the next stage of the pandemic and into the recovery beyond.

The budget comes on the heels of Canada’s largest peace-time spending spree in its history. In the Fall Economic Statement released last November, Ottawa projected a deficit of $381.6 billion – or 17.5 per cent of gross domestic product – in the 2020-21 fiscal year after unprecedented income supports and overall economic destruction due to the pandemic led to a torrent of red ink.

The feds acknowledged at the time that the deficit could swell beyond $400 billion depending on the trajectory of the virus and new lockdown measures meant to curb its spread.

Following BNN Bloomberg's reporting on Ottawa's growing focus on our savings accounts as a source of potent fiscal stimulus, Deputy Prime Minister and Finance Minister Chrystia Freeland, talks about the importance of consumer spending in the recovery. She also talks about other aid measures and assures the government will be "disciplined" in further stimulus.

That record-shattering deficit prompted Ottawa to scrap its long-held pledge to stick to a “fiscal anchor” of a declining debt-to-GDP ratio, instead adopting what it calls “fiscal guardrails” to ensure the national debt load does not spiral out of control. Ottawa projects the debt-to-GDP ratio will peak in the coming fiscal year at 52.6 per cent before steadily declining over the forecast horizon.

In the same statement, the feds forecast a further budgetary shortfall of $121.2 billion in fiscal 2021-22 and a deficit of $50.7 billion in 2022-23. Those figures don’t account for a further $70 billion to $100 billion worth of spending over the next three years, which the feds earmarked for further stimulus spending.

While the government has pledged that spending to help support the recovery, there are questions over how much further stimulus the domestic economy needs after months of pandemic-forced consumer savings.

Economists surveyed by BNN Bloomberg this month overwhelmingly said the Canadian economy could get a much larger boost from widespread vaccinations than from further government spending, with Canadian households and businesses sitting on an estimated $170 billion worth of excess cash. Freeland has since described that cash hoard as a source of “pre-loaded stimulus” that could be unleashed into the domestic economy once there are widespread economic reopenings allowing Canadians to spend freely. 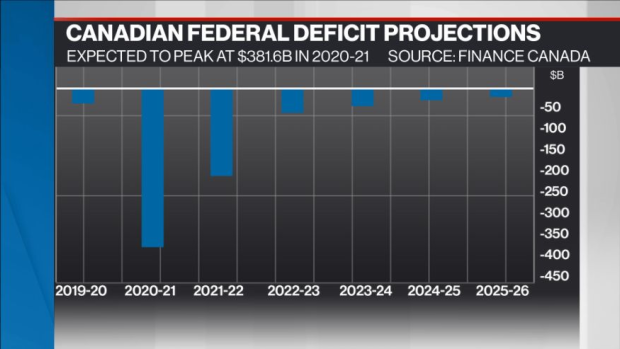 In a Dec. 4 interview, Freeland highlighted that cash pile as a potential way for households to turbocharge the economic recovery.

“None of us have a crystal ball, but economists have been pointing out that some Canadian households, and it tends to be the better-off households, do have quite a lot of money that they’ve saved because there hasn’t been that much to do in the pandemic. And certainly it would be great if that money could go towards driving our recovery,” she said.

Among the other hot button issues expected in this year’s budget are how Canada intends to avoid long-term scarring to overall potential output, further action to combat climate change, and plans for a national childcare plan.

The feds have cited the record-low cost of borrowing as a mitigating factor for its spending spree, but there are some concerns that debt-servicing costs may exceed their original expectations. While the Bank of Canada has pledged to keep its policy rate near the effective lower bound, conditions in the credit market have seen benchmark Canadian government bond yields rise, which impacts the cost of borrowing not only for regular Canadians but for the government as well.