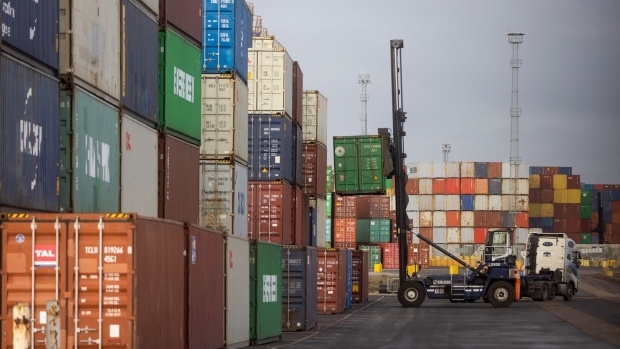 Shipping containers on the dockside at the Port of Felixstowe Ltd. in Felixstowe, U.K., on Thursday, Jan. 20, 2022. The Danish carrier AP Moller-Maersk A/S has been overtaken by Mediterranean Shipping Co. in terms of capacity, according to data compiled by Alphaliner , Bloomberg

(Bloomberg) -- Dock workers have been offered a £500 bonus as the company behind Felixstowe, Britain’s biggest container ship port, tries to avoid an eight-day strike later this month.

Unions will put the offer, which comes on top of a 7% pay rise, to salaried staff at the port. However, workers paid hourly at Felixstowe will not have the proposal put to them as Unite, the labor group, holds out for a better deal.

Members of Unite last week voted to strike from Aug. 21 to Aug. 29. The port is a key hub for imports as well as some exports from the UK, and accounts for nearly half the country’s container flows. The walkouts will have a “huge effect” on supply chains and cause severe disruption to international maritime trade, according to the union, which represents almost 2,000 dock workers and is vowing a full shutdown of the port.

“There will be no winners from a strike which will only result in their members losing money they would otherwise have earned,” a spokesperson for Hutchison Ports UK said in a statement Tuesday.

The unit of CK Hutchison Holdings Ltd. said it had urged the union to reconsider its offer and take it to all its members.

“Felixstowe docks is massively profitable,” said Unite’s national officer Robert Morton. “It can afford to put forward a reasonable pay offer to our members but once again has chosen not to. That decision was driven by greed not need.”

He said the union remained open to further talks.

Dock workers in Liverpool are also voting on whether to strike over pay, with a decision due at the start of next week.

Disruption at the ports resulted in widespread gaps on shelves in Britain’s supermarkets and high street shops last year, amid a chronic shortage of truck drivers and a global supply chain crunch triggered by the easing of Covid-19 restrictions.

With the looming threat of strike action, retailers are making contingency plans to avoid a similar fate.

“We’re working closely with our third-party logistics providers to minimize any potential disruption to our supply chain and are closely monitoring the situation,” a spokesperson for John Lewis said.

“This type of disruption to the supply chain is never welcome,” added Andrew Goodacre, Chief Executive of the British Independent Retailers Association. “The supply chain in the UK is very efficient and resilient, but this type of strike action in Felixstowe will really test it.”

Felixstowe accounts for nearly half the country’s container trade. The port handles more than four million containers and about 2,000 ships each year.

(Adds union quotation and extra paragraphs of context toward the end)