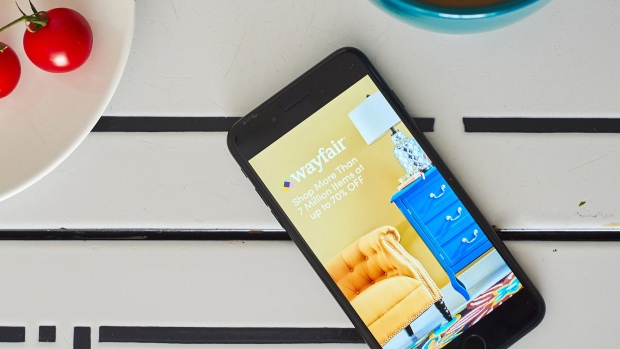 The Wayfair Inc. application is displayed on an Apple Inc. iPhone in this arranged photograph taken in the Brooklyn Borough of New York, U.S. , Photographer: Gabby Jones/Bloomberg

Two weeks after his report was published in April, Wayfair reported quarterly net revenue of US$2.33 billion, just US$600 million shy of Weinstein’s estimate, which was higher than the consensus forecast of US$2.28 billion.

Shares in the online retailer have since risen about 100 per cent.

“We were able to identify Wayfair and their different brands and look at the amount of spending that is occurring,” said Weinstein, an analyst for M Science, a New York-based data-driven analytics firm. “And it showed a sharp acceleration exiting the quarter and made us optimistic.”

The data, which has no personal information attached, is perfectly legal, he added.

Once the preserve of hedge funds, alternative data or “alt data,” is becoming a must-have for banks, asset managers and government organizations as the pandemic creates a vacuum of timely information for investment decisions.

“A large part of the power of alternative data is that it gives you a view into what’s going on almost in real time,” said Abraham Thomas, chief data officer at Quandl Inc., a Toronto-based data analytics firm.

Restaurant reservations and data from transit apps that track how many people are checking bus and train schedules are among indicators giving economists and investors clues as to whether economies are reopening and how successful they have been.

“Things are falling fast, things are normalizing potentially fast as well,” said Nikita Perevalov, director of economic forecasting at Bank of Nova Scotia. “Once various government officials start talking about reopening, we don’t know how to quantify it either it. So all of those weekly indicators can help us.”

Perevalov is paying more attention to restaurant bookings, gasoline demand, electricity usage and coronavirus infection curves across U.S. states and provinces to help determine the only question that matters for markets right now: will the recovery be quick or slow?

“You really have to have some more data at higher frequency,” Perevalov said.

Kevin McCreadie, chief executive officer at AGF Management Ltd., who has been building out a quant team over the past four to five years, now has more than 20 people in North America focused on alternative data in order to help his portfolio managers.

With Florida and Georgia among the first U.S. states to reopen in North America, restaurant data has been key for AGF as well, McCreadie said. Monitoring the number of people that go through checkpoints via data from Transportation Security Administration data will also provide information on whether activity is picking back up, he said.

McCreadie believes alternative data is here to stay with more groups within the financial services industry like mergers and acquisition bankers beginning to use it. “I’ve heard people are doing due diligence using drones.

Stuff we probably wouldn’t have done a year ago or two years ago,” he said.

Corporate executives have been loath to give detailed outlooks with everything so uncertain.

“There’s guidance provided in the data,” said Michael Marrale, chief executive officer of M Science, a unit of Jefferies Financial Group. “It’s there, you just have to figure out how to interpret it.”

The firm studies data including sales from used-car dealers like Carvana Co. and CarMax Inc., where it has seen a bit of bounce recently, and digs into the types of restaurants that have done well during the pandemic like quick service and casual eateries.

Nasdaq-owned Quandl is looking at whether there’s been a “virus-induced shift” in home renovations during the pandemic, with more fences being built compared with pools, Abraham said.

The company also monitors car sales, foot traffic at malls, hours worked at small businesses and corporate hiring among other sources of information which it collates from its own proprietary data base and from external sources like Homebase and Womply.

“Once you start using data as an investor, you don’t go back,” M Science’s Marrale said. “This is a watershed moment for alternative data.”