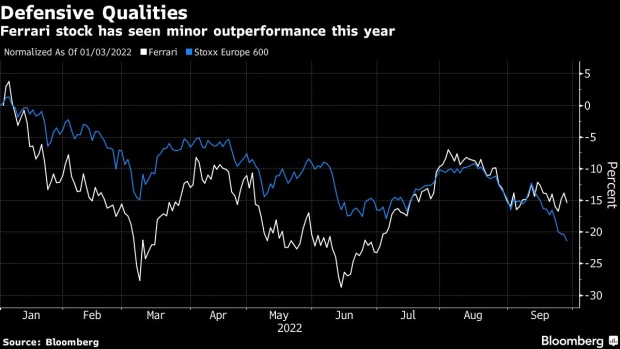 Investors looking for a safer place to put their money as a downturn threatens markets could do worse than buy shares in Ferrari NV.

That’s the view of Morgan Stanley analysts who said in a note Wednesday that the luxury vehicle-maker is “as close to recession proof as it gets” among stocks the firm covers. Analysts including Adam Jonas reiterated their overweight rating on Ferrari, fueling buzz around the sector on the eve of an initial public offering of sports-car maker Porsche AG.

Morgan Stanley updated its assessment of the Maranello, Italy-based company to include the new Purosangue -- Ferrari’s first ever four-door production vehicle and its “first spin on the ‘don’t call it an SUV!’ genre,” according to Jonas. The car should sell for about 390,000 euros ($373,000), the Wall Street bank said.

Volkswagen AG is likely to price an IPO of Porsche at the top-end of a marketed range on Wednesday. While luxury shares are sometimes viewed as a haven because of the resilience of spending among the wealthiest, some analysts -- including those at Canaccord Genuity Ltd.’s Quest unit -- say demand at Porsche is more cyclical than at Ferrari.

The Morgan Stanley analysts increased their earnings-per-share estimates for Ferrari by a range of 7% to 10% for the 2023-2025 fiscal years.