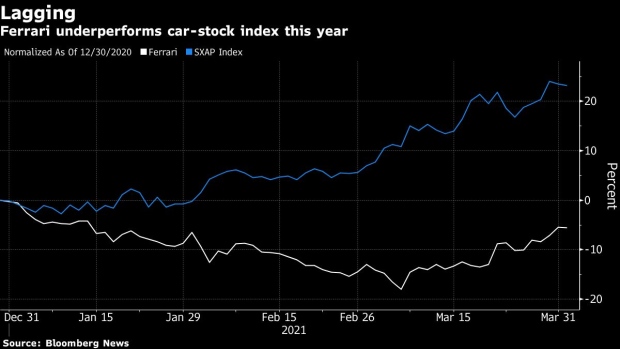 A steering wheel is seen inside a Ferrari NV vehicle on display during the Gallery event at the MGM Grand Detroit ahead of the 2019 North American International Auto Show (NAIAS) in Detroit, Michigan, U.S., on Saturday, Jan. 12, 2019. The auto show will be noticeably light on exciting debuts this year as automakers chase customers elsewhere. Photographer: Daniel Acker/Bloomberg , Bloomberg

(Bloomberg) -- After racing clear of its rivals for years, Ferrari NV has been relegated to the back row of the stock market grid.

The Italian supercar maker, the top performer in the Stoxx 600 Automobiles & Parts index for each of the last three years, has fallen 5.6% since the start of 2021 and just suffered its worst quarter since the end of 2018. That’s a marked contrast to strong gains by rivals including including Volkswagen AG, which owns luxury brands Porsche, Bugatti and Lamborghini.

While competitors, particularly VW, have got a boost from the hullabaloo around electric vehicles, the company known for its Prancing Horse logo has run into setbacks including an underwhelming earnings forecast. Without a clear EV strategy, Ferrari has also been hurt by an unresolved search for a new chief executive, and a broader rotation out of so-called growth names for a company that some investors regard more as a luxury play.

“The stock has become too expensive and earnings momentum is fading,” said Sanford C. Bernstein analyst Arndt Ellinghorst, also noting uncertainty over the CEO situation and a “lack of EV vision.”

In February’s results announcement, Ferrari gave a conservative earnings outlook for this year as the carmaker works through disruption from the pandemic on top of the unexpected search for a new leader. Citing personal reasons, Louis Camilleri abruptly retired from his role as CEO in December, leaving the company facing its second leadership crisis in as many years and complicating the transition toward electric mobility.

Whoever takes the helm will face a challenging legacy, with Ferrari’s strategy for a full-electric vehicle remaining an unclear long-shot project. Camilleri cast doubts over the plan during his last analyst call in November, saying he didn’t see the carmaker ever being at 100% EV “and certainly, not in my lifetime will it reach even 50%.” Elkann said in February that he envisages Ferrari making a fully-electric car by the end of this decade.

A new CEO will also need to combine the need to keep pace with tightening emissions regulations while satisfying the love of its power-hungry customers for the traditional thermal engine.

A spokesman for Ferrari declined to comment for this article.

The stock’s lofty valuation multiple relative to other carmakers doesn’t leave much room for upset. According to RBC Capital analyst Tom Narayan, Ferrari is less of an auto stock and “more of a luxury play.”

Reflecting that status among investors, the stock rose 28% in 2020, similar to the performance of Birkin bag maker Hermes International and luxury leader LVMH, while most auto stocks were weighed down by the pandemic.

“The outperformance last year was due to the fact that the stock is perceived as more defensive and so something to own when everything else falls,” said Antonio Amendola, a portfolio manager at Acomea Sgr. “In the end, those who can afford a Ferrari can afford it in any conditions.”

This year, stock market dynamics have changed, with investors shifting more toward cyclical stocks and away from defensives as the rollout of vaccines fuels optimism over a global economic recovery.

“With the market rotation, it’s normal to see some profit taking,” said Amendola. “Ferrari’s fundamentals are solid and this can be an opportunity to accumulate if the underperformance persists.”

And according to UBS Group AG analyst Susy Tibaldi, concern over the company’s approach toward electric vehicles may not be fully justified.

“We don’t think the company is under the same pressure and urgency as its non-luxury peers, due to the fact that a Ferrari per se is not a means of transportation but rather a status symbol, and is rarely the first car in a household,” Tibaldi, who rates Ferrari buy, wrote in a March 30 note.