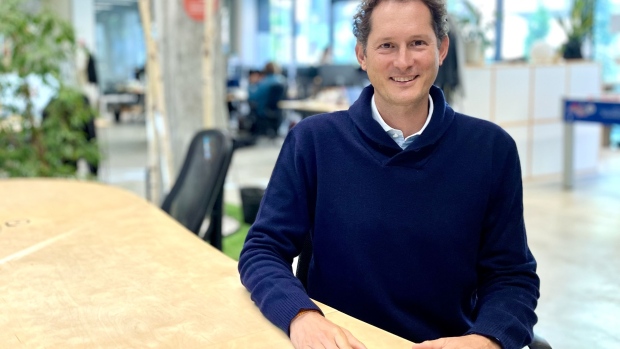 (Bloomberg) -- John Elkann, the scion of Italy’s Agnelli clan, sees potential for a “new Tesla” to emerge from the current wave of energy transition at a time his family’s Exor NV holding is investing in startups, including some focused on cleaner sources.

“There’s a lot of excitement in energy transition, and not just for automotive, at some point I guess you’ll have a trillion-dollar company coming from here,” Elkann, 46, said in an interview Wednesday at his office inside Turin’s Fondazione Agnelli building.

Energy transition is a theme that’s already gotten the Agnellis’ attention, and among its roughly 70 startup investments, the holding has bets on everything from a new-generation nuclear power generator to a unicorn company focused on converting natural gas flares into Bitcoin power.

Exor’s early-stage capital branch has invested about €1 billion ($970 million) in startups over the last five years, as the Agnellis diversifying their traditional automotive holdings: the biggest stake in Stellantis NV and control of Ferrari NV.

Exor, whose net asset value totaled about €31 billion at the end of June, earlier this year cashed out $9 billion through the sale of reinsurer PartnerRe to France’s Covea. The holding now plans to focus on expansion in health and luxury, as well as on technology, which Elkann says isn’t an alternative to other industries but a complementary area of focus.

“With the mobility sector having started its most radical transformation in over a century, we started getting involved in the tech industry five years ago, as well working with the venture capital world,” Elkann said.

Elkann, speaking ahead of the Italian Tech Week forum in Turin, where he serves as organizer, also gave some hints on Exor’s investment strategy.

“I can’t rule out at some point in the future a big deal in the tech industry by Exor,” Elkann said. “But that’s not our current focus, and we much prefer a step-by-step approach to accompany startups.”

The Agnellis recently rebranded Exor Seeds, their early-stage arm, as Exor Ventures, to underscore a commitment to venture capitalism. The holding last year tapped Diego Piacentini, a veteran of both Apple Inc. and Amazon.com Inc., as chairman of the unit.

In the interview, Elkann reaffirmed the billionaire family’s commitment to Italy, highlighting how it’s working with young entrepreneurs. Exor is also pushing its Vento program, which is set to provide up to €150,000 in financing to dozens of early-stage Italian startups.

The Agnelli clan leader said he sees potential for startups and tech in Italy, where the family’s Fiat SpA once dominated a manufacturing-heavy industrial landscape.

Now, Italian unicorn companies are emerging, especially in fintech, including payments specialist Scalapay Srl and mobile digital platform Satispay SpA, which earlier this week completed a €320 million round of fund-raising that values it at more than €1 billion.

For Exor, recent bets include US-based biotech Altos Labs Inc., which focuses on cellular rejuvenation programming. On the real estate side, the holding earlier this year pumped about €100 million into Italian digital company Casavo, which offers instant solutions for buyers and sellers of property.

Some of Exor’s other bets are clearly linked to the current energy transition trend, with the holding recently investing in London-based nuclear startup Newcleo, a company looking at ways to cut development and production costs for nuclear power so it can play a bigger role in the transition away from fossil fuels.

Another Exor play on transition is Crusoe Energy Systems, a Denver-based firm that works with energy companies to capture surplus gas, converting byproducts into electricity to power data centers and crypto-mining operations.

But even with an ever-more diverse investment portfolio, Exor is still making bets on transportation. Exor paid $200 million in 2020 for a stake in ride-share specialist Via Transportation Inc., which designs software for transit systems to allow them to provide on-demand alternatives to fixed route service.

And in a highly symbolic move, the Agnellis essentially safeguarded the future of the historic Turin Mirafiori plant, as Stellantis transformed the factory into a hub for battery-powered vehicles including the electric version of the Fiat 500.