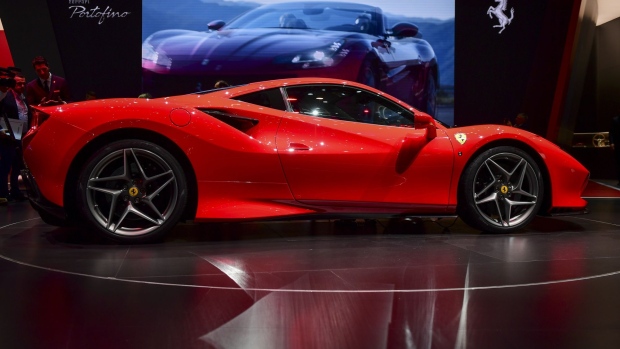 The new Ferrari NV F8 Tributo supercar sits on display on the opening day of the 89th Geneva International Motor Show in Geneva, Switzerland, on Tuesday, March 5, 2019. The show near Lake Leman, which opens to the public from March 7 to 17, will be the first gilded showcase of the year for the likes of Bugatti, Koenigsegg, Lamborghini, and Pininfarina, among others. , Bloomberg

(Bloomberg) -- Ferrari NV pushed back earnings targets set years ago as the Italian supercar maker searches for a new leader to help it regain traction.

The Italian manufacturer delayed plans to earn at least 1.8 billion euros ($2.2 billion) before interest, taxes, depreciation and amortization by 2022, saying it now plans to reach that threshold a year later because of effects of the pandemic. Ferrari already eased its target in September 2018, when Louis Camilleri was settling in as the successor to long-time leader Sergio Marchionne.

Chairman John Elkann has been chief executive officer on an interim basis since Camilleri, 66, abruptly resigned in December. Elkann, the Agnelli family scion and head of holding company Exor NV, said last month that Ferrari was making good progress in its search for a permanent CEO who will have the “technological capabilities” to lead the lead the company forward.

Ferrari shares fell almost 7% in Milan trading, extending this year’s decline. The stock has underperformed in early 2021 after leading the Stoxx 600 Automobiles & Parts Index each of the last three years. After rivals Volkswagen AG and Daimler AG capitalized on enthusiasm around electric vehicles, Elkann said during last month’s annual general meeting that Ferrari will unveil its first EV model in 2025.

Adjusted Ebitda rose to 376 million euros in the first quarter, topping analysts’ average estimate of 368.3 million euros. Shipments in the period totaled 2,771 units, up slightly from a year ago.

The next CEO of Ferrari will inherit a company that’s been reluctant to abandon the internal combustion engine. A month before Camilleri resigned for unspecified personal reasons, he told analysts he didn’t see Ferrari ever shifting to 100% EVs and ruled out the company moving to 50% electric in his lifetime.